How did YOU get in there Spike?

A recent order from Craftwork Cards was sitting here begging to be played with - a luscious White Embossed Pad containing loads of already die cut and embossed frames, plus backing card, embossed to match. Also, a pack of 'Fanciful' shaped cards. So, this card just had to be made: 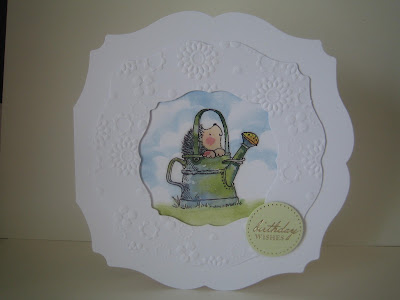 - the background was made by pencilling a circle about half an inch wider than the frame aperture directly onto the Fanciful shaped card so I could work within that area and know it'd be hidden by the frame. Then I used a tip from Sarn (thanks for that my friend!) to colour the clouds by using a sponge finger dauber and SU's 'Bashful Blue' ink pad. For the cloud template I used a die cut scalloped circle and just moved it about, starting from the top, rather than the bigger template I'd normally use with Distress Inks and a duster brush 'cos the image is a small one. Then a swoosh of SU's 'Certainly Celery' across the bottom

- Penny Black Stickeroo from the 'Bunch of Love' sheet - little tip here, if you try this out then do be aware that a lot of the PB hedgie Stickeroos wouldn't work as the sky/clouds would show through their white tummies unless you mask the area first

-  embossed frame from the White Embossed Pad, added with some thin sticky pads which I buy at Wilkinsons. At £16.99 the embossed pad doesn't come cheap but there are 54 frames and 12 sheets of 8" x 8" embossed card stock, so that should keep me happy for a while

Little update on our hedgehogs, at least one comes to feed in the garden every night. We aren't sure if it's the same one or not - the 'calling cards' it leaves behind aren't signed :)

Thanks for calling by!