OK, to set the scene. My Dad's father was quite an eccentric, as well as being very strict with his offspring. Even up until Grandad was in his 80's my Dad was still a bit in awe of him.

When I was a kid, Grandad lived in the wilds of Yorkshire in a little stone cottage, no electricity (except from a temperamental generator), so the lighting was all gas lamps, and for a long time there wasn't even running water. To be honest, I think he was more than a bit eccentric - verging on bonkers more like :(  His faithful companion was a Border Collie, imaginatively called Lassie (or Lass for short). 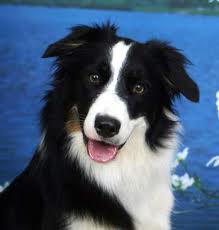 One Winter, when I was about five years old we were staying with him and I came down with pneumonia - not surprising really considering the place was damp and pretty cold unless you huddled in front of the fire.

Grandad had a job as a night watchman and off he went to work one evening, I should say that he had to walk as we had more than a couple of feet of snow. My Dad had already struggled miles through the drifts to get the local doctor and then again for a prescription so he wasn't overly happy when Grandad issued instructions to take Lass out for her evening walk. Crumbs, the snow was higher than she was!

Come about 10pm Mum reminded Dad of the task in hand, Dad took one look out of the little front door and saw that the snow was falling thick and fast and sort of lost the plot a bit :( 'No way am I going out in that' he muttered and went into the kitchen area for a rummage. Ha, just the thing, a washing line!

About 30 minutes later it was time to let Lass back into the cottage - front door was opened and the line was reeled in, I guess you know what's coming next. Just a chewed end of the washing line where Lassie had gnawed through it :(

So, being more than a little afraid of Grandad's temper, on went the layers of clothes once again, wellies were donned and, waving a tilley lamp, off into the night went Dad. He called and searched until he was hoarse but no sign of Lassie - and the snow was still falling thick and fast. Eventually Dad decided he'd have to face the music and returned to the cottage - this time thinking it was a good idea to return via the little back porch where he could leave his wellies and not trudge snow right through the place.

Ahem, and there, curled up fast asleep in the porch out of the driving snow was - Lass :( Seems she merely chewed through the washing line, scarpered round to the back of the cottage and had been there all the while.

Today's card, appropriately enough with a snowman on, is below :)