Especially to appease Hettie - aka Sam

I did laugh at Sam's comment on the previous 'snowman' card I made for Craftyhazelnuts Christmas Card Challenge over here. This is what Sam said - bad girl:

Lovely card Di but isn't this challenge a little sexist - there are snow women too you know!
Do you know the difference between snowmen and snow women?
Snowballs!
LOL!

Well, honestly - there was fighting talk, and a laugh as well of course.

I hadn't explained that Hazel did say that snow men or women were fine for the challenge so of course, once the gauntlet had been thrown down, I just had to make this cutie in response to Sam's tongue in cheek 'accusation': 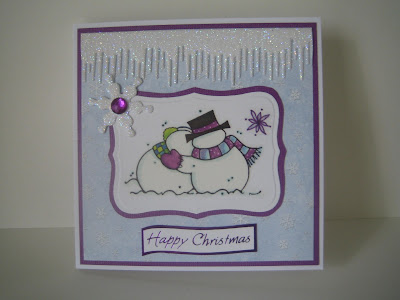 - magenta Core'dinations card for the matting and also behind the image

- sentiment from my goodies - from QVC in a big mixed set of colours, possibly by Kanban

- a cheap Poundland clear gem, coloured to match using a Pro Marker - I did three different shades before I was happy with the match :)

So Sam, hope this one meets with your approval :) And here's another entry Hazel!