This recipe was published in the Daily Mail, ten and a half years ago, and I only just tried it out last week. It's a Celebrity Recipe, one given by John Stapleton, who rightly said 'The best thing about this dish is that everyone thinks you have slaved for hours over it, yet it only takes moments to prepare': 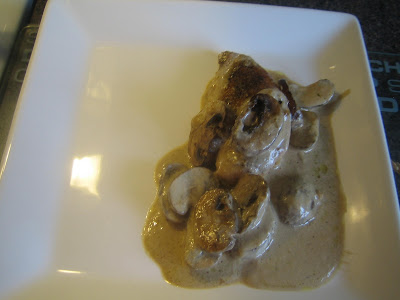 Lightly oil a baking dish, and arrange the chicken in it. Brush with oil and season. Cook in a hot oven - 200C/400f/gas mark 6 - for 20 minutes until nearly cooked.

Meanwhile, mix together the cream, sauces and mustard in a bowl, pour over the almost cooked chicken and add the mushrooms.

Cook gently for a further 20 minutes.

Try serving with mashed potatoes and a green salad.

Things I do: Firstly, I have to admit that the photo doesn't look overly appetising :( But typing this I can almost smell the dish - and it's one to be made again really soon. As I was cooking for the two of us, I just used two chicken breasts and reduced the sauce and mushrooms by a third. To be truthful, both cooking stages said to cook the chicken for up to 30 minutes, and this was far too long. Thankfully the chicken didn't end up as tough as a road runner, but that could have happened. Also, I have absolutely no idea how you'd divide 16 chicken thighs equally between six people - but that's what the recipe says. In fact, next time I might try chicken thighs - perhaps three each?

*** Mushroom Ketchup isn't always the easiest thing to find in a supermarket, it's a bit like a cross between Worcestershire Sauce and Soy Sauce, and the same consistency. I generally find it in Sainsburys Supermarket, where the 'speciality groceries/ bottles and jars' are. A little bit in a stew or casserole just gives it a bit of zing so the bottle wouldn't go to waste :)

And, despite the things I've highlighted, it's really worth a try. Enjoy!