I found this recipe in a woman's magazine a little while ago, reprinted from 1982. It's the name that initially appealed to me I must admit, as well as using great yet simple ingredients. Apparently (I bet Elizabeth will confirm this) it's a Scottish dish, I made it for the first time the other evening and it's delicious, real comfort food: 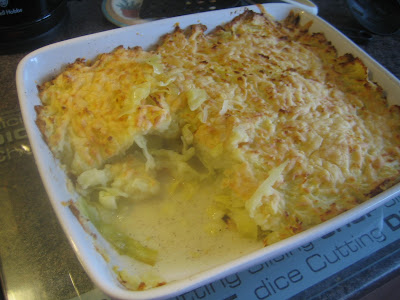 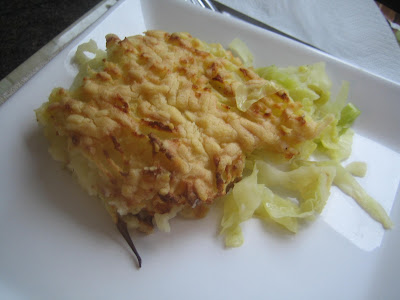 Mix cabbage, onion and seasoning in a large buttered ovenproof dish.
Pour in 150ml (1⁄4 pint) water, and dot with butter (I used Flora Light instead of butter). Spoon potato over evenly, then sprinkle with cheese.

Bake for 35-40 minutes until golden brown. Serve with sausages, if you like.
Things I did: nothing different really, although I didn't read the number of people it serves so I made the whole whack!  It really would serve six quite adequately. Half a cabbage wouldn't be easy to buy these days anyhow so I kept half and just reheated it, covered in foil, in the oven the following evening. The first evening we had it with sausages and then the next evening with thick cut ham and a fried egg each - oink, oink! I could only find white cabbage in the supermarket and it was just fine, although I reckon that a dark green Savoy cabbage would be really nice too.