I was reminded of today's Tuesday Tale the other afternoon, whilst pulling a load of rhubarb from the garden. 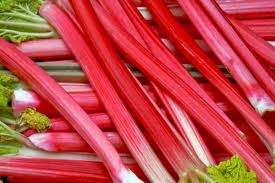 We love rhubarb here, but my Dad absolutely hated it for some reason and always referred to it as 'bloodshot celery' :)

When I was about eight years old we lived in Germany and my Mum was unexpectedly rushed into hospital, leaving us to fend for ourselves. The suddenness had meant that no preplanning had been done on the home front by Mum of course. Also, the hospital was some distance away so I didn't see her for the whole time she was hospitalised.

Mum was in hospital for about three weeks and, when she was almost well enough to leave hospital, she was asking  Dad how he was coping with running the home. He blithely said 'No worries, we're absolutely fine. Eating well and Diane is clean and tidy for school'. Bless him  - I suppose he wasn't telling fibs, although his head was stuck somewhere either in the sand or even worse - and of course I wasn't with him to 'snitch'. Then he added 'You know though, I think we need to talk about your grocery shopping. I truly don't understand why it costs so much'.

Came the grand return home and I think Mum almost had a relapse :( Of course I'd been kept clean and tidy for school, but by then I don't think there was much in the line of fresh clothing - in fact I was probably destined to be wearing Dad's underpants if things had gone on much longer. So, there was a Chinese laundry's worth of washing and ironing to catch up on.

Then Mum opened the fridge - empty - so she went to check the pantry - empty. No wonder Dad thought Mum was being extravagant with the groceries, all he'd bought was fresh milk, bread and perhaps fresh meat and eggs. Absolutely everything else has been cleared out of the fridge, kitchen cupboards and the pantry - talk about Old Mother Hubbard's Cupboard! Tea, sugar, coffee, every can, jar, bottle, most packets - you name it - gone!

Then something caught her eye in the vegetable rack - yup, a big bundle of 'bloodshot celery', by now totally limp and looking very sorry for itself. Apparently that had been destined for a pie the day Mum unexpectedly went into hospital - but Dad hated it so much he couldn't even bring himself to touch it and throw it out :(

I'm not sure he was ever allowed to live one that down. Another time, remind me to tell you about the roasting tin debacle.

My 'rhubarb pink' card for today is below :)