I just bet most of us remember our first day at work - mine almost scarred me mentally for life: 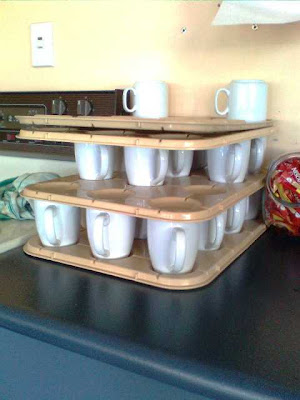 I was the youngest in the office, at a local Electricity Board, and as such treated like the office junior until I realised they were pulling a fast one.

For some weird reason, absolutely every single of the female staff had to wear a blue overall - even if you were based in an office and never clapped eyes on the general public. On my first day I was issued with said overall, nylon, stiff and VERY long. Recipe for disaster really :(

Just before tea break time I was taken up into the attic area and shown the kitchen where there was a huge array of different shaped and patterned mugs, each belonging to specific individuals. Wide eyed I just nodded dumbly as Dorothy (she'd have been about 30+ and seemed ancient to me, we're still in touch all these years later) rattled through a list of about fourteen people, pointing out their individual mugs and whether they liked strong or weak tea or coffee, no milk, some milk, a lot of milk, sugar or no sugar etc. etc. then waltzed off back down the creaking stairs leaving me to it.

For goodness sakes, I was 18, fresh out of school and certainly no domestic goddess, with a memory like a sieve as an additional handicap.

Undaunted, and probably too scared to admit I was totally lost I struggled as best I could and eventually, after an absolute age, had a tray all loaded with the best attempt I could muster.

Betcha know what's coming next, I took two steps down the flight of stairs, my 'kitten heel' (remember those, first time round?) got caught in the hem of that stupid overall and WHOOSH down I went - hurling the whole tray of mugs up in the air. I was physically fine but the whole kit and caboodle was smashed to smithereens and the place looked as if it had been raining tea and coffee. I just wanted to curl up and die with embarrassment.

Evil, but thinking back, it probably served them right for throwing me in the deep end like that :)