AO delivered the new microwave and took our old one away, exactly as planned, on Monday. I thoroughly recommend them if you're UK based. Let's hope that's the last appliance to be replaced for a little while - she says, eyeing up the iron and waiting for it to be next.
Then, I suddenly realised I'd missed a few Birthdays during this lock down, which really upset me. One was Len's great nephew who recently turned 21 - and despite it being very late, I couldn't let that pass without a card (and the usual cheque).
So, here's my snippets card for this fortnight: 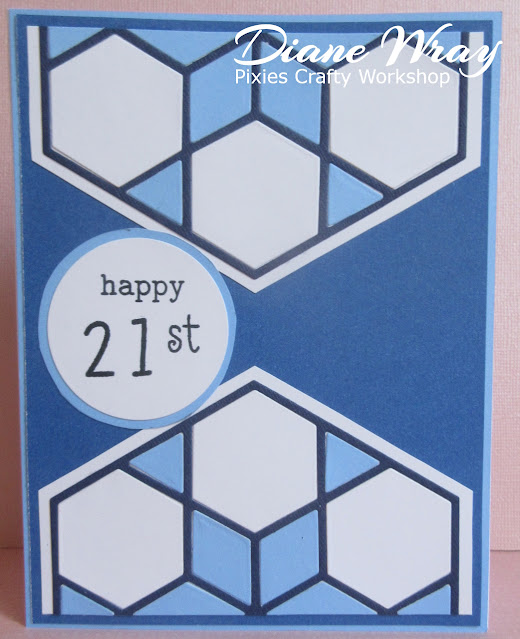 
- 5.5" x 4.25" white card blank, side opening
- assorted snippets of blue card - all from a partly used Hobbycraft pack
- added a full layer of medium blue card to the card front, covering it completely - the blue card wasn't heavy enough to dive into a fresh sheet and make the whole card blank blue
- then topped the card front with a slightly smaller layer of dark blue card
- next, time to play with a NBUS set of four dies by Spellbinders called 'Optical Illusion Kaleidoscope'
- first of all I drew around the outside of the large die, using a white card snippet and pencil, to make a 'frame' for the next step and hand cut it
- die cut the large die using a snippet of dark blue card and glued it on top of the white hexagon using a Zig glue pen
- die cut six small hexagons from a snippet of white card, and glued them in place using a Zip glue pen
- die cut six small diamonds and six small triangles from snippets of the medium blue card and also glued those in place using a Zig glue pen
- then, using my rarely used Woodware rotary trimmer, carefully sliced the large made up hexagon in two across the centre
- glued the two halves of the hexagon at the top and the bottom of the card front
- stamped the sentiment using a snippet of white card, a selection of stamps from the Hero Arts 'Whimsical Numbers' and the word 'happy' from Winnie and Walter's The Big, the Bold and the Happy' stamp set - plus my mini Misti and Memento 'Tuxedo Black' ink pad
- then die cut the sentiment using a Tonic Studio's 'Circle Layering' die
- drew around the outside of that same circle die onto a snippets of the medium blue card and fussy cut it before gluing behind the sentiment as a 'frame'
- finally, glued the sentiment circle in place
Despite feeling the pressure, I did enjoy making this card and it's interesting how it looks quite 3D, depending on which part of the pattern you focus on. I confess to finding a card to CASE on Spellbinder's own website - which seemed just right for a chap. Leaving the hexagon whole produces a more feminine feel, IMHO. I also liked how a sample card on the site used just the central star 'skeleton' to build up snowflakes. And you can also leave the whole frame unfilled for a real optical illusion effect. Some ideas to try next I think.
And needless to say, here's the prize for this fortnight: 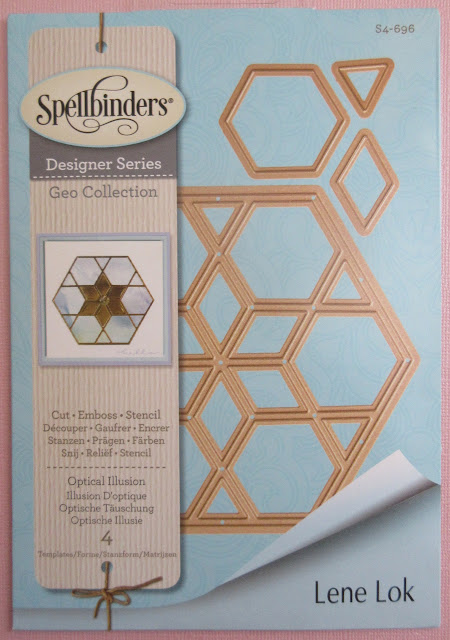 It's a Spellbinders 'Optical Illusion Kaleidoscope' set of dies - absolutely perfect for using up snippets!

As always, the Snippets Challenge will run for two weeks and the Playground gates will close at 11am UK time on Saturday 25th July. The gates will open again at midnight UK time on the same day.


Remember, if you link into the Playground and don't say clearly that you want to be in the draw in a comment on here, then you will be bypassed if your name comes out of Mr Linky. I'm sure you all know I ask for a positive 'yes' on the blog post itself - just in case you're only playing for fun - otherwise I don't add you to my little list.
I had a lot of trouble this week when trying to link an entry from a new Playmate's Instagram account. Got it to work in a fashion eventually, but I know others of you use Instagram to link here and wonder if you ever hit 'unable to find' image error message issues? I worked round it by saving the whole IG post to my own laptop then picking the image up from there - but obviously I can't do that each time for our new Playmate. And I think she only works using her phone. Surely, one should be able to use Instagram and do an entry directly from your phone? I've raised a ticket with Mr Linky - and we're in discussion. One thing that makes me wonder is - do any of you set tight security settings which may invoke https rather than http? Darnell already gave me some info. about the one she uses - thanks for that chick!

It doesn't seem as if anyone has had any luck tracking down a new toy for Bella:
Not to worry - it always was a long shot anyhow. A lovely friend has offered to make one, but that really is one heck of a thing to take on.
Speaking of dog's toys, Dudley finally chewed through one cheek of his Monkey toy - so he's now onto 'Stinky Monkey the Fifth'. I don't mind snipping an ear off a toy if it's coming loose and can't be repaired but as soon as any inside stuffing is visible and can't be repaired, sadly it has to go to the great toy box in the sky. I promise you, I did not fancy sewing up a soggy wet monkey's face! I did the swop whilst Dudley was out for a walk with Len the other morning and hid the old monkey well out of his way, leaving the new one exactly where he left its predecessor. We acted really casually, and after a few suspicious sniffs - Dudley accepted the replacement, picked it up and wandered off to get to know it better. Ha, he must know I'm writing about him - he just came and slipped past my legs to curl up under the desk ☺
As I used the set of dies for the very first time, it means I can join in with Darnell's NBUS #16 challenge HERE!
Thanks also for your feedback about the no-line colouring. I'm going to try various ideas as soon as I find time - much appreciated!
Stay safe my lovely friends.