What a week of tail chasing here! It ended on Friday with the delights of a routine blood test at our local surgery, with the nurse having several attempts to find a co-operative vein - oh deep joy.

In between it all I managed to make a snippets card for this challenge - at one point in Thursday afternoon it was looking a bit 'touch and go'. However, this is the result: 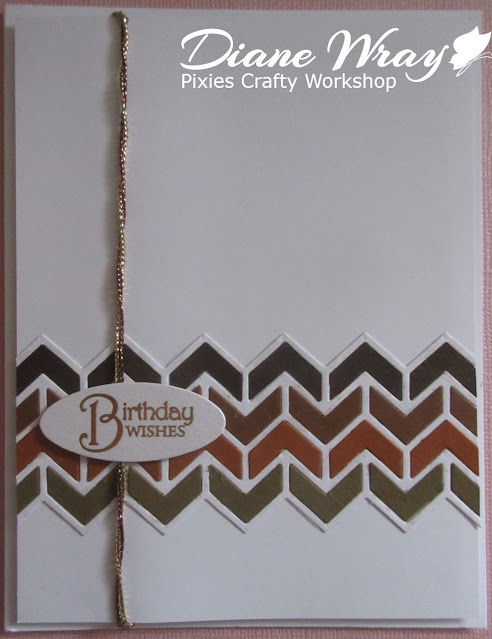 - glued the die cut in place onto the white panel using a Zig glue pen, leaving some of the die cut hanging over at either side, to be trimmed off later

- rummaged around in my overflowing snippets folder amongst the 'fifty shades of brown' and pulled out four different snippets (forgot to take a photo, although I was watching the clock as it was almost time to groom Dudley)

- then die cut the snippets using the same chevron die, one colour at a time to avoid getting in a muddle

- trimmed the overhanging sides of the chevron with the inserted chevrons, from the back using small sharp scissors

- backed the whole white panel with a piece of fun foam trimmed to  5" x 3.75" - using Collall All Purpose glue

- glued the panel onto the card front

- final touch, added a Craftwork Cards pre-made and die cut gold on white oval Birthday sentiment on top of the chevron panel - little tip, I used thin sticky pads and made a sort of bridge with two pieces of sticky pad so that the twine wasn't squashed down at all

And there you have it - what I hope is a card suitable for a chap. I'd originally intended using blue snippets but couldn't find four shades of blue snippets which really worked together.

Let's move onto the prize for this fortnight's challenge - which you will no doubt have already guessed: 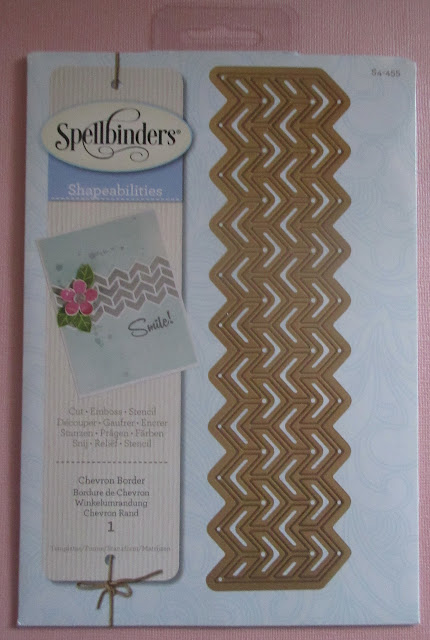 My 'sample' card is very much based on a card I found HERE - a lovely blog with several clever ideas how to use the Spellbinders Shapeabilities 'Chevron Border' die (I went for the quickest one and also one using snippets of course!). The prize is also the same die that Christine used for her Hope & Chances Charity kit card that I published HERE not so long ago. I loved the die cut in the kit so much I ran out (metaphorically speaking) and bought the die, one for me and one for the toybox! It's a super die and I've seen it used in red and gold for Christmas cards - stunning!

A couple of points about the die - I reckon you really should use waxed paper or similar for easy release of the die cut. I find this with Spellbinders dies, particularly more intricate ones. I didn't use waxed paper and struggled a bit, but got there in the end - I have a roll of the stuff but was too lazy involved to get it from a cupboard literally just behind me in here, which would actually have saved me time in the long run. Also, I had to use shims (just card or paper) - which is often the case with a long and fairly intricate die cut. Don't let that put you off joining in the draw - it's a great die for male cards and would be lovely (for example) for a baby card, made in advance in pink and blue all ready for you to add a sentiment or whatever you fancy.

As always, the Snippets Challenge will run for two weeks and the Playground gates will close at 11am UK time on Saturday 19th December. The gates will open again at midnight UK time on the same day.

Remember, if you link into the Playground and don't say clearly that you want to be in the draw in a comment on here, then you will be bypassed if your name comes out of Mr Linky. I'm sure you all know I ask for a positive 'yes' on the blog post itself - just in case you're only playing for fun - otherwise I don't add you to my little list.
Please also remember that I only allow a total of nine other challenges, which makes 10 in total, when you enter a snippets make into the Playground.
One little task this weekend is to make Dudley some more doggy treats as he's just finished the ones I made a few weeks ago. Knowing the things he particularly likes (cheese and carrots top the list!) I'm going for a recipe which uses wholemeal flour, polenta, grated cheddar cheese and grated carrot, egg, sesame seeds, sunflower seeds and a touch of black pepper. It's from a book I bought fairly recently called 'Homemade Dog Treats Recipe Book' published in the UK by Wet Nose Publishing. How sweet is that for a publisher's name then?! I'll let you know the outcome and whether Dudley approves!
BTW - we thought Dudley had stopped hiding toys in our bed, but last night Len found that Benjamin Bear was safely tucked under the duvet! Absolutely no idea when he actually does this - his second name is 'Stealth' we've decided!
Lots of love from us all - Parsnip, Dudley and of course me. Stay safe.