Yay, it's prize D - D for Dudley Dog! Here are two cards I made using the same stamp set and (admittedly) minimal snippets. First of all Dudley's card to Len - and then our card to Dudley, I know - crazy people: 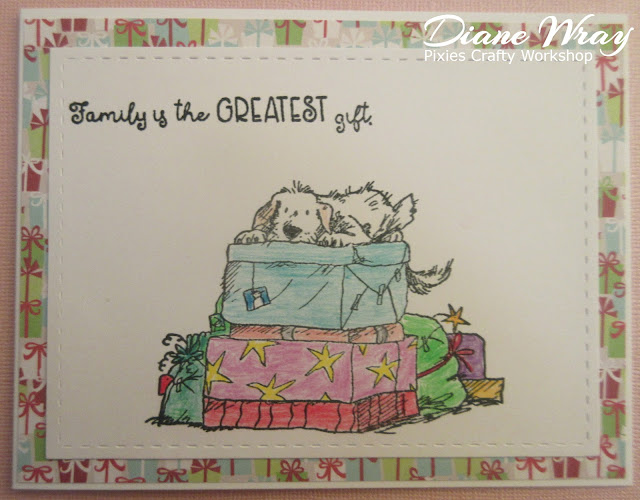 I love the sentiment on the above card- so true. 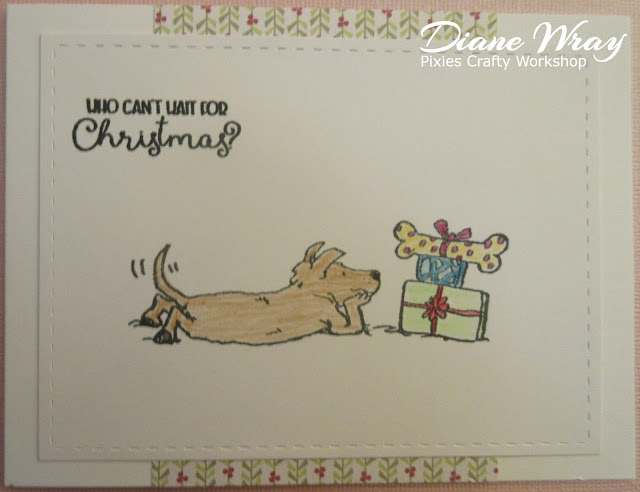 After taking the photo I added grey shadow to the above card underneath the doggie's tummy area - so he didn't look as if he was levitating! ☺

- for the stamping I used Memento 'Tuxedo Black' ink, the Misti and stamps from a lovely set of stamps by The Colorado Craft Company called 'Christmas Presents'

- then I coloured the images using Faber-Castell Polychromos pencils, deliberately leaving the pencil strokes quite visible - explanation /excuse why is further down

- glued patterned paper and images onto the card fronts - finished! Some of the paper doesn't join underneath the image panel, but that's always a good way to use up smallish snippets I find 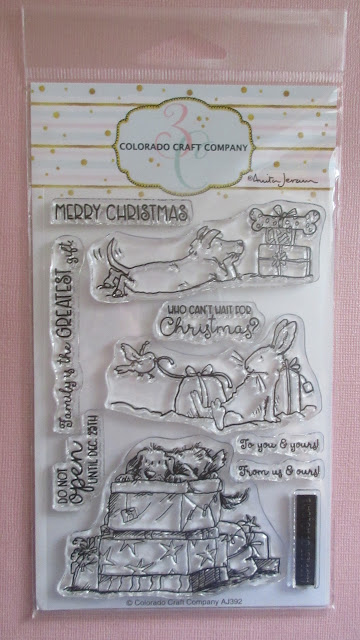 It's a (new to me) Colorado Craft Company set of stamps called 'Christmas Presents'. There's just one of these to be won this time, basically as it's a bit more expensive than the smaller prizes, it now seems to be sold out and I also think it might be of more interest to some people than to others. Prove me wrong though if you wish ☺

The reason I chose this set of stamps is because they're based on images by the artist Anita Jeram, who is a talented children's book author and illustrator - best known for her illustrations for Sam McBratney's 'Guess How Much I Love You' children's book, published in 1994. And of course, one image in particular (the one I used for Dudley's card to Len) reminded me so much of Dudley that I had to buy it! Little hint, she also uses cats in her illustrations - just wait and see! The reason I left the images a little bit 'sketchy' is that Anita doesn't overwork her illustrations .................. and the other reason was that I was frantically colouring late in the afternoon of 23rd December as I needed the Dudley cards for Christmas Day and was also in a bid to be able to step away from the blog for a few days!

Len hasn't been too well for a couple of days which I freely admit impacts on how much I need to cope with when he's 'down and out' especially as I struggle with things like even the stairs these days, so it's been a bit of a battle with last minute preparations and also juggling the blog. Why do I do it you may ask? This year more than ever we need things to look forward to and I only hope you look forward to seeing what's going to pop up next on here.

I know that Christmas Day will be very tiring (or will have been by the time you read this) and I'll need a good 24 hours to recover (thankfully we're all set up for 'cold cuts and leftovers' on Boxing Day though - which I like even more than the main event on Christmas Day). So that I can have a more relaxing day on Boxing Day, and as it isn't even written yet, I'm definitely moving the usual Sunday post which will cover picks from Challenge 392 as well as the winner of the Spellbinders 'Chevron Border' die to at least Monday 28th December. I know you'll understand. Just keep watching until I pop up again - thank goodness the challenge runs for three weeks!

Then we'll pick up speed again - still a good few more prizes to come - we're not quite halfway there yet! Stay safe you lovely ladies and keep tuning in!