I just spent a whole day yesterday working on stuff for our school association and at about 5pm realised that all the work was for nothing :( The logo I'd been using is to be replaced by a special 20th Anniversary one for this next reunion in 2013 - and it isn't a case of dropping a new one into place, I just know that - plus I'd made up all the samples ready for an association committee meeting this weekend too. There's still steam rising from Hampshire right now!

So that scuppered Wednesday for me as I'll just have to start again - no chance of hopping about on WOYWW and it ain't fair to link so I'll be missing in action once again.

But, after hurling stuff round the craft room in a right little tantrum, I whipped this little card up instead: 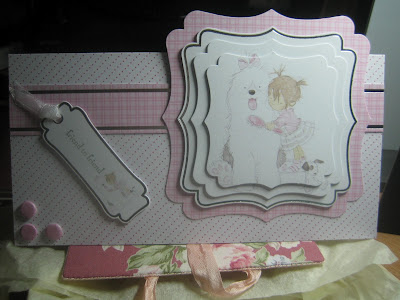 - card cut to DL size, strip of silver edged card and layered up (already done!) image, all by Kan Ban from their 'Special Moments' collection  - this one is called 'Sunday Best'

- the label is also from the kit, I stamped a little sentiment using Memento 'London Fog' - the sentiment stamp is by SU from the 'Pocket Silhouettes' set - good old SU to the rescue again

- little snippet of white organza ribbon and three card candies - coloured with a Pro Marker as all the pinks I had weren't 'blue toned' enough. To be honest, a big bag of white card candi is a great route as you can always colour those to suit

You can see what a rush I was in, it was getting dark outside so I plonked the card down and pressed the shutter on the camera! Nowt fancy, after the day I'd had!!!