Made this for a little boy living close to us who is coming up to four years old - he's so excited about Halloween and the decorations have been done round their front door so we fully expect a little 'Trick or Treat' knock this evening: 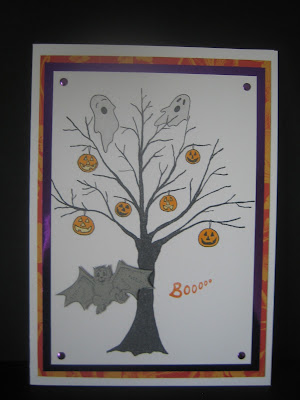 - orange backing paper from Papermania's 'Sunshine' capsule collection, it was the only orange paper/card I could lay my hands on although I could have used the Pro Marker 'edge the card trick', wasn't thinking though

- and the little bat just had to play too - it's the one that Darnell kindly sent me, stamped onto a snippet of grey card. I gave him slightly pink cheeks too as he looks about to do a crash landing :)

Quite a lot of years ago when I lived 'oop North' I was gardening and a little pipistrelle bat (in broad daylight, which is very unusual) flew into the glass of the greenhouse and stunned itself. Not sure what to do, I gently picked it up and just held it in my cupped hands. What a pretty little creature it was, although it shouldn't have been out playing in the middle of the day!  After several minutes it recovered and flew off into the orchard - hopefully to recover before flying back to Mum. Often in the evening, when the colony came out to play, swooping round the terrace at the back of the house, I wondered if he/she was amongst them - I hope so as it was a magical experience I'd been lucky enough to have!

Am skipping WOYWW yet again, not enough time to play fair and blog hop - but I did pick up that WOYWW got a mention on the radio the other morning :)