About four years ago I came across the free instructions for 'geisha girls' in a link from the lovely Kirsty Wiseman's blog - I started by making the costumes and a few cards and then the box of half done stuff got buried. Doing some sorting out here yesterday I came across the box again and made this: 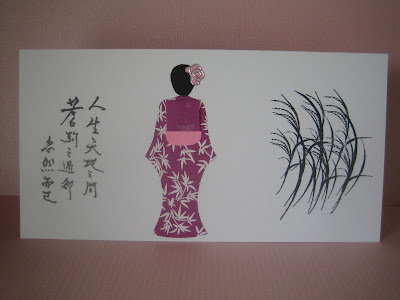 - The geisha girl was made as per Kirsty's instructions using some Japanese style origami paper that was also hidden away in the box (brilliant way to use up snippets too). The flower tucked in the geisha's hair, just behind her 'bun' which shows up in real life but I think not in the photo is just a silver rose peel off, stuck onto pearlescent pink paper and trimmed round

-  The grasses and sentiment were stamped in Memento Tuxedo Black ink and the
stamps are from The English Stamp Company called 'Oriental Clear Stamps' - had them for donkey's years and this is their first outing, slap wrists! Yeah right, but there's no indication of what the wording means - for all I know it could say 'Sweet and sour prawns, chicken and beansprout stir-fry, fried rice and prawn crackers for two please'.....or the equivalent in Japanese :(

Totally rubbish lighting here means the 'writing' side of the card look as if it isn't evenly stamped - how weird is that? Also,hindsight being 20/20 vision, I now think that the grasses could have been 'grounded' at the bottom right with the sentiment at the top of the left hand side - oops, too late :(Sigh.

Edit: I just whipped up another one, with the grasses and sentiment moved a bit: 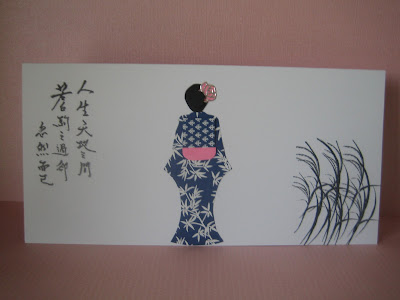 Have also worked out that it's light coming in from a window to the left that's sort of fading the writing - Autumn is on the way, might have to begin using the daylight lamp for piccies :(

That translation business reminds me of a Tuesday Tale - will be back later with it.