A Tuesday Tale - 'The last word'

Yesterday's card, and me wondering just what the Oriental/ Japanese wording on the stamp I used might be, reminded me of this tale I heard ages ago: 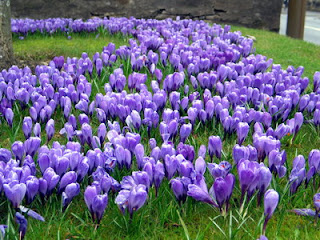 Towards the end of WWII we had quite a few German POWs over here - but, us being 'jolly fair Brits', a lot of them were allowed to have a fair amount of freedom and to work outside of the camps for pocket money.

One very nice young German was employed by a lady seeking someone to tend to her gardens. She took quite a liking to the young chap and gave him pretty much free rein so, when he suggested that it would be really nice to plant crocus bulbs in the rather large front lawn, she readily agreed thinking 'How jolly to have naturalised crocuses popping up in the Spring'.

The end of the war meant that he was repatriated before Spring came and she was quite sad to see him go as he'd worked diligently and been no trouble at all. Sure enough, little green shoots began to appear in the front lawn once the snow began to clear. After a while, a few days of sunshine meant they began to bloom and they were quite a sight to behold.

That is, until she glanced out of an upstairs bedroom window to admire them from above and realised that he'd left her a message - they spelt out 'HEIL HITLER'.