Just been counting up and really you only have another five Rudolph Days after this one - so why not make a Christmas card and hop over to Sarn's with it? In fact, I almost got caught out as I thought the 25th was Wednesday - although you do have until the end of June to enter. There was a bit of flinging round of craft stuff in here yesterday afternoon to finish this I can tell you! 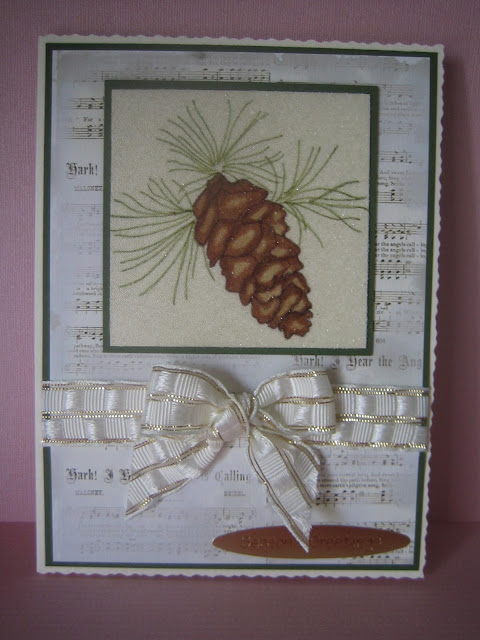 - image is a Woodware stamps called 'Fir Cone', coloured with a mix of Pro Markers and Whispers pens. Then I added double sided sticky film, a layer of very fine micro beads, backed it with green card and then popped it onto the card with sticky pads

- ribbon from my ribbon box, bought in Germany. It was wired down either side but never let that put you off if you really like a particular ribbon and have tweezers and strong specs handy - 'cos it can be pulled out, with a bit of Percy Veerance

- the gold sentiment label is a very old one, possibly Lakeland, and it doesn't show up too good in the photo, sigh. Mind you - the creams look washed out as well :(

Am also entering this into Craftyhazlenut's Christmas Challenge Extra for June, which is always 'Anything Goes'.

That makes 45 finished Christmas cards in the box - wahoo!