Normally, at school reunions, there's a little ritual. Moira, Angie and myself are almost joined at the hip as we trot round - and one lovely chap from school days,  who is a true Scot with a delightful sense of humour, will always chant 'Here's The Three Wee Witches' whenever we appear. Of course it's normally in the bar area of whichever hotel we're staying in or perhaps a hostelry we chance upon whilst out looking for mischief! Ha, having parked our broomsticks nicely outside of course :)

This time Moira couldn't make the reunion, so Angie and I bought her a little something whilst we were there and this card was sent with it once I was home - it's arrived as I had a lovely phone call to say so earlier today: 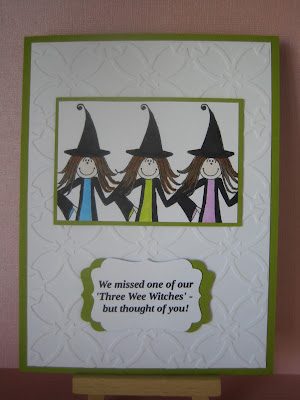 - computer produced sentiment, punched with SU's 'Decorative Label' punch then layered onto a 'Lucky Limeade' one which was split down the centre and trimmed so it tucked underneath

And the gift we sent to our missing Wee Witch? A newly produced CD containing digitised copies of all the many hundreds of photos in our centralised memorabilia photo albums (formal and, err, very informal), some video of previous reunions and a copy of the book that was compiled containing so many memories of ex-pupils and staff - all on the one CD.

Ha, two 'non-contributors' are ex-members of staff - who took their vows and are both nuns now! Says something that we drove both of them into (different) convents :(

Today's the day to write up the Playground and do the little prize draws - good luck if you joined in - hope you can hop by tomorrow and see who got lucky!

Have a lovely weekend!