Wow, another really busy week in the Playground - despite our lovely weather here in the UK. I see the duck pond is in full swing with folk taking the plunge :) I bought this stamp some while ago: 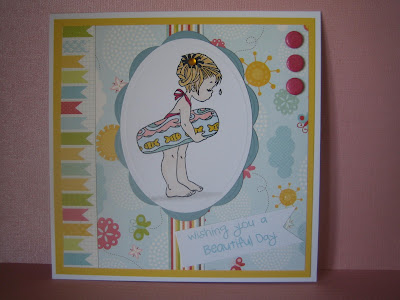 - image is by Elisabeth Bell for Belle's and Whistles and it's called 'Tube Wear', coloured with Pro Markers and a tickle of Glossy Accents on the sweet little drop of water she's shaking off plus some around her feet and a little yellow gem in the centre of the hair decoration thingy she's wearing. Cut with an oval Nestie and then mounted onto a snippet of SU 'Baja Breeze', cut with a scalloped oval

- all patterned papers came from Echo Park's 'Hello Summer' paper pad - the main background was a whole sheet trimmed, the other pieces are snippets which I keep with the pads

- the sentiment is one of the larger ones from the Whimsical Delights 'Whimsical Fun - Vol. 1' set, stamped onto a white snippet using SU 'Baja Breeze' and just snipped into a pennant

Ha, ha - there's a deliberate mistake in the way I assembled the card so don't look too closely.......I said don't look! Sigh, OK, so I stuck the assembled backing onto the card stock upside down so the spine should have been the opening. The pennants ought to have been along the top but I flipped the card to tent orientation before adding the topper etc and  almost got away with it but the clouds are on their sides, snigger!

A quick fly through some entries for this week: 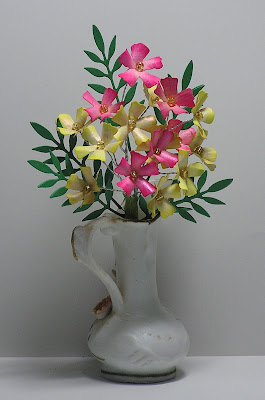 Cathy R made this stunning little bouquet, and not only that, she deservedly won over at Cuttlebug Mania with it - gorgeous and so small, hop over and look how it compares to a small Stickles-like bottle! 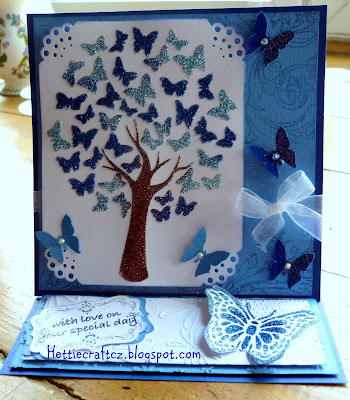 Hettie (Sam) made this stunning Wedding card using loads of snippets - my immediate reaction was that the Arboscello Tree die would lend itself to this treatment :)

I really could cover loads more, every entry was beautiful as always, but I need to move onto the prizes etc. BUT, not before showing you this card made by Bonnie. 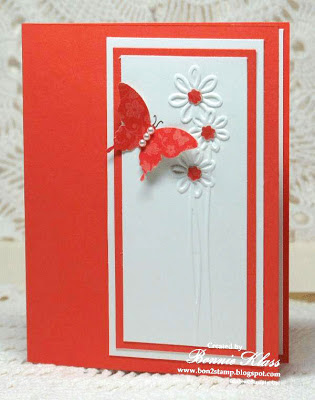 It's a fabulous card in its own right, but the story behind it is very moving. A lovely young girl called Maddy is undergoing chemo for the second time and lots of crafters are making cards to send to her as encouragement. I thought it would be a lovely gesture if we try to follow Bonnie's little plea and make cards to send to Maddy - all the details are over on the posting on Bonnie's blog, link above the photo.

Prizes - off to run the Random number thingy for the SU 'Sprinkled Expressions' stamps set - and the winner is:

Karen P
This took me three tries, people who say no thank you to prizes always seem to come out first! But, I do know that Karen was really keen on this stamp set so well done - especially as you also won Ryn's Droplets stamp in week 71, wahoo on a winning streak :)

And next is the really tricky one - the Ryn Tanaka Water Droplets stamps that are on offer. Well, I've been keeping a secret - I ran off to Ryn's and bought even more Water Droplets stamps since you all went wild over the first draw and then there was such a rush to do three entries last/this week, and even six entries over the last two weeks - amazing! I couldn't tell you my plans as that would spoil the surprise but I really did try to quietly encourage you as much as possible!

So, I'm doing it in order of the number of entries and FIVE of you entered six times for Ryn's stamp over the two week period. One of you, Mary H, was playing along to see if she could win and then very kindly pass her chance to someone else (thank you for that Mary, what a lovely lady you are!) - so that leaves THREE of you: Elizabeth,Maudiroff (Maureen) and Bonnie. Each of you will get a 'Water Droplets' stamp.

But, I still had five stamps left - so here's the next little selection, I picked folk who made a total of five cards with three of them in one week over the two week period: ScrappyMo and Shaz in Oz - you both win a Water Droplets stamp :)

So now we're down to three stamps and taking away all those who already won a stamp or said they had it already - we had one person left who entered three times in this last week only, and there was meant to be a draw so only that one person was eligible - and that's Debs, so you also win a Water Droplets stamp. Wahoo - me enjoying this!!

And last, but by no means least, is someone who entered three times in the first of this two week period and that's Kath.

I've gone over and over the last two weeks entries so I really hope no-one is disappointed and that I didn't make a big boo-boo anywhere. By my reckoning, if you entered three times in even just one of the weeks you ought to be in the names above. If you think I accidentally left you out then please say so!! I should also add, this is a one-off girls - my pension can't take it :) But I did have such fun here watching for third entries and it's a little thank you for all the fun over almost 18 months now!

Can I please ask though that every one of you who won sends me an email confirming that you do want the stamp and including your snail mail address. I do have most of your addresses but it really would make things so much quicker for me to whizz through some emails and copy and paste your addresses into a text document to make labels without having to search through various (very disorganised) files and emails here. My email addy is di_wray@hotmail.com and can you please try to put Water Droplets in the subject line. Ta!

So - with all that over, here's this coming week's prize, Hang on, I need a lie-down after all that excitement! 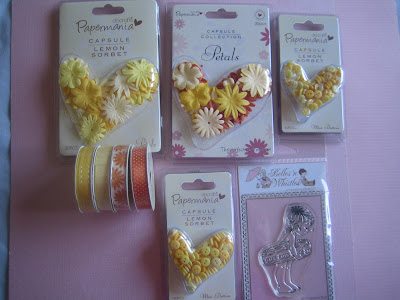 It's a touch of Summer - a stamp the same as the one I used today from me, plus some lovely Prima goodies, kindly sent to me by Sue as a prize. Gorgeous shades of lemon and orange, flowers, ribbons (hey up Sarn!) and also teeny little buttons to match - one pack is plain and the other has little polka dots. Thank you so much Sue!

We're back to normal 'rools' now and the Playground will run as usual this week with the gates closing at noon UK time on Saturday 15th June. I'm off to a local village Carnival that afternoon (I heard a rumour that Len has lined me up for the 'ducking stool' in the village pond) but I should be organised enough to re-open at midnight on Saturday.

Maximum of three entries and please say 'No thank you' in a comment if you wish to still play but not be a winner of this week's prize, the Elisabeth Bell 'Tube Wear' stamp and those lovely embellishments donated by Sue. Mr Linky is below - have fun!