The Picklin' Pixie at work

Some of you will have gathered I had a sudden burst of 'Domestic Goddessitis' a couple of weeks ago - and had a go at making pickles after a lapse of over 20 years at least. The first thing I made was piccalilli, so run away now if you don't like it - although you could be nice and stay just to see how OCD I am about the packaging of things.

Len hopes it isn't a case of 'presentation is all' - in fact he snaffled a taste of a little bit left over after I'd finished sealing the jars and even then, unmatured, it got the big thumbs up :) Ha, yesterday I caught him hovering in the cool garage by the shelves the pickle jars are stored on - asking plaintively if they're nearly ready to eat!! Sigh, I'm gonna have to keep counting them. 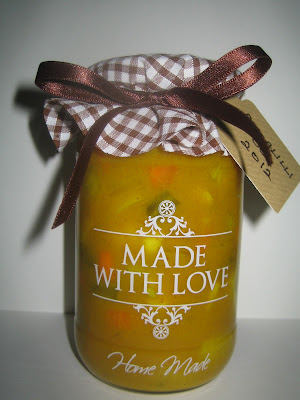 The recipe says: this tastes a hundred times better than anything you could buy in the shops. Amazingly it tastes pretty good as soon as it's cooled, but ideally it should be left for at least a month to allow the flavours to develop. We've opened jars after 6 months and they are even better! Ginger makes this quite fiery, you might want to adjust the quantity to suit your own taste (I did reduce the amount!). Vegetables can be varied according to personal preference; red peppers and sweetcorn are suggestions.

Place all prepared veg in a large bowl, toss with the salt, and leave for 24 hours. Then RINSE VERY WELL in several changes of water. Drain well by leaving in colander for half an hour.

After rinsing and draining the veg well, put sifted flour and spices into a large pan and gradually add the vinegar, blending well to a smooth paste with no lumps (very important). Add the rest of the vinegar and the sugar and bring to the boil stirring all the time till thick.

Add the prepared vegetables and bring back to the boil for 2 minutes. Remove from heat, pot into warm, sterile jars (to top) and seal immediately. NB. I worked fast and didn't close the jars until they were all  filled as the contents settled a bit so I went round and added more.

Leave for 1 month, to allow it to mature, before eating. Can apparently be kept unopened in a cool, dark place for 18 months, although I can't verify this. Great in sandwiches, with cheese and cold meats, etc.
This is what the vegetables looked like before being salted, there were two of these large Pyrex bowls - Dumbo here gave away her huge mixing bowl some while ago, big mistake really: 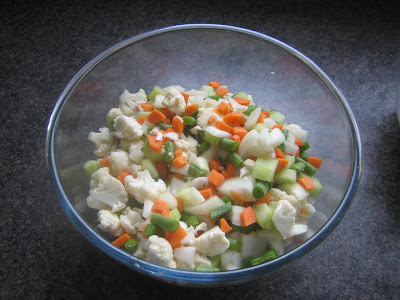 The one thing that bugged me about this recipe is that weighed small amounts are given in grammes rather than spoon measurements, I tried to convert as I went along but soon lost the will to live - for example 13g of mild curry powder equated to 2 slightly rounded tablespoons, as did the turmeric if that helps. My scales aren't electronic ones so they don't go right down to the accuracy of 13g so I had to resort to the teeny set of scales I use for calculating postage :( All a bit of a palaver and electronic scales are top of my shopping list this week.
I stuck to the suggested ingredients, but another time will probably try sweetcorn instead of either the carrots or fine beans as a change.

I hope the fiddling with weighing won't put you off as I also tasted the leftovers and am sure it's gonna be a hit.

And, of course because this was a sudden 'fad', I didn't have any jars saved so had to buy some online - but these ones with the etching on are adorable I think and lovely if you intend to give the pickles away at Christmas, told you about the OCD :) The little labels were just punched from Kraft card using a label punch and a small hole maker punch. And yes, I did take a snippet of the gingham into Hobbycraft to find the closest match in brown ribbon!! Jute would have looked good either.