It's another one using the Marianne Design Christmas Creatables die set I bought last year called 'Star and Bauble' and this, already die cut and glittered star, was also in the little box I'd forgotten about: 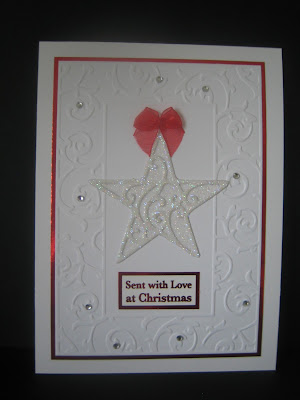 - 7" x 5" white card stock, slightly trimmed so that the matting would have the same sized border all around

- a snippet of red mirri card as backing

- the silver sparkled star was given the double sided Woodware sticky film treatment (Handy Hippo stock it in the UK), backed then trimmed round before sprinkling Crystal Glamour Dust over. Again, as with the gold bauble the other day, the effect is lovely - almost like sparkly gauze - and then I just peeled the backing off to fix it to the embossed background

- a few little crystal gems here and there

Things are busier than ever here, it's time for the old school newsletter (600+) to be printed, enveloped, labelled, stamped and sent out. I'm hoping we manage to find another volunteer to take it over - after five years of doing the soul-destroying mahoosive job every four months or so, I'm ready for someone else to take a turn - but it's unlikely we'll find anyone daft enough...........sigh :(