And I forgot the 'rule of threes'

I made this card a long while ago when I first set out on my blogging journey, for Len's sister-in-law: 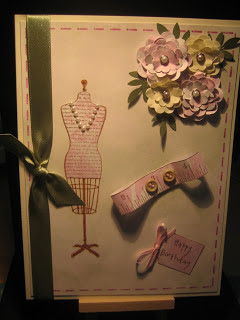 - distressed the background using Tim Holtz distress ink pads in Milled Lavender and Bundled Sage but they just look washed out in the above piccie! As I'm hopeless at drawing straight lines I did the outline stitching (with a 'Puce' Aqua Marker) round the edge using Paper Pizazz's Easy Stitches template. For me this works but the stitches on this A4 template are quite large (you do get quite a variety though). I hadn't even considered doing 'real stitching' back then :)

- paper pieced the body of the dummy using some pink and cream patterned paper and also cut out flowers from the same paper plus some toning cream paper with the Cuttlebug 'Flowers' die. Almost the very first die set I bought. I then crumpled each layer of the flowers and layered them together with pearl brads. And that's where I forgot the 'rule of threes' and shoved four flowers onto the card - that really grated when I found this photo on an old SD card last week :( The leaves were punched from sage green card using Martha Stewart's 'Frond' punch

- the tape measure (it's 6" long) also comes in the stamp set so I stamped this onto the pink and cream paper, trimmed it and then joined it into a circle before attaching a couple of teeny sage green buttons with some pink embroidery cotton. I found it easier and less bulky to literally sew the buttons to the tape measure rather than stick them on

- then, the finishing touches were just where I felt it looked a bit 'bare' so a few teensy pearls round the dummy's neck, a little pink bow on the tag and then a piece of sage green satin ribbon tied down the left hand side of the card

Anyhow, Maureen liked it despite me breaking rules - but I still wish I'd stuck to three flowers :(

The rain has stopped here - yay!