I bought a lovely Marianne Design Christmas Creatables die set last year called 'Star and Bauble'. I cut a few out, glittered them, popped them in a little box - and promptly forgot all about them until last week: 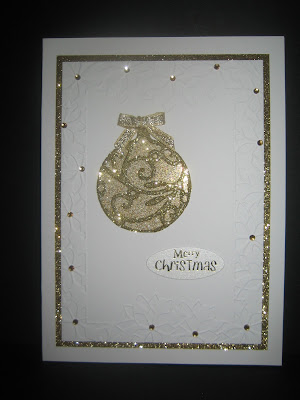 - 7" x 5" white card stock, slightly trimmed so that the matting would have the same sized border all around

- a snippet of smooth yet really sparkly gold self adhesive film, stuck onto card before being trimmed for the oblong backing - didn't trust myself to cut it and stick it straight onto the card stock :)

- the gold sparkled bauble then came out of the box and I pondered how it could be properly fixed to the card front as it's all like fine wire. Aha, out came the double sided Woodware sticky film (Handy Hippo stock it in the UK) and I backed the bauble with it and trimmed round before sprinkling gold Glamour Dust over. The effect is lovely - almost like gold gauze - and then I just peeled the backing off and hey presto, a secure fix!

- a little gold bow was then made using a fork as a 'bow maker'. Here's the link to show how it's done

- a few little gold gems here and there in the centres of the poinsettias - which are super but the embossing doesn't show up too well :(

Sooo funny though, ever since last Christmas I've thought one of our 'everyday' forks was missing - snigger, when making the little gold bow, I realised that said fork had found it's way into the craft room in September 2011 and never been returned - slap my wrists :)

The idea to back the bauble came from another blog I love to visit, I think someone was given some die cuts and then backed them with mirri card which is also a lovely effect. Sorry, I've searched and can't recall where I saw the idea but 'thank you' as that triggered my 'bauble tweaking'.........am I allowed to say that?!

There are a couple of challenges I'd like to enter this for:

That's my offering for today - and yes, I did get glitter all over the place, messy pup!