Martha Stewart was a good girl

...because, this time a packet of MS embellishments I bought in NM came with the promised 10 rather than just four lacy butterflies and six teeny gems :)

I wanted some little cards to enclose with Snippets Playground prizes etc. so made a couple of these for starters, the production line will be going to make more in different colours (mauves and pinks) as they were such fun: 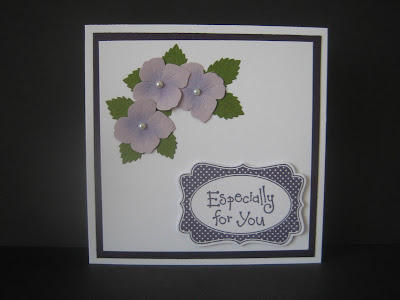 - deep purple (aubergine really) backing paper from the snippets folder - ages ago I'd bought a pack of quite sturdy but thinner than card envelopes to punch out butterflies for some sample Wedding invitations. Another design was chosen by the happy couple so there I was with nine envelopes left to chop up and file away

- a snippet of white card

- one of the MS embellishments - the set is called 'Hydrangea'

Yay! It's Friday - hope you all have a great weekend.

I'm supposed to drive up to beyond Oxford for a school reunion Committee meeting to finalise plans for our Summer Reunion in June. But we're all watching the weather forecast - it's held at the National Herb Centre near Banbury. A lovely spot but, out in the wilds and very exposed, I've almost been stuck there previously in snowy conditions :( Don't fancy living on herbs for a few days......although they do sell wine I think :)