....that's the current challenge over at Craftyhazelnut's Christmas Challenge. 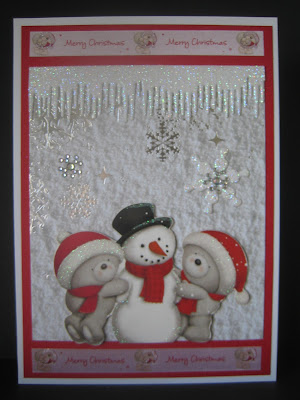 A quick rummage through my box of Christmas cards turned up these little cuties, already die cut and carefully peeled off the card they arrived on, ready to be upcycled.

- icicles  and snowflake from my little box of ready made die cut and glittered embellishments. The icicles were cut using Marianne Creatables LR036 die, the snowflake is also Marianne Creatables - LR0123. Both were die cut from white card with double sided adhesive film stuck on, then dunked into iridescent glitter

- strips of self-adhesive ribbon from a Fizzy Moon pack, with similar bears on :)

- a couple of diamante snowflakes

Am also entering this into Craftyhazelnut's Christmas Challenge Extra :)

I hate to say it with more than 10 months to go, I need to step up production if next Christmas isn't going to be a mad rush.