We had friends round for dinner recently and, whilst setting the table that afternoon, I suddenly remembered a neglected stamp. The connection was that I was using our lovely Charles Rennie Mackintosh place mats and coasters, bought quite a few years ago as a lovely gift by my buddy Moira - who lives near Glasgow. I've always been a fan of CRM and would love to go to the Hunterian museum in Glasgow some day, it's on my 'bucket list'.

This is the card I subsequently made with that 'neglected and never used before' stamp: 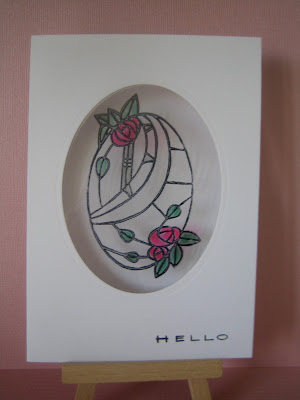 - a large Nesties oval to cut the aperture on a piece of backing card and then I used the trick of placing the cut aperture piece over the front of the card itself, popping the Nestie back in and running it through the Cuttlebug so that the inside lines up with the front (hope that makes sense?)

- the image was stamped onto acetate with another amazing bargain from the fabulous Kraft Kabin (where Julia of WOYWW runs classes), costing all of £1, a wooden stamp by Funstamps called 'F-M66 Glasgow Nouveau 1'

- the sentiment is from a Stampendous set called 'Happy Messages' also stamped in StazOn just 'cos it was to hand. I'd looked at a few Charles Rennie websites and realised that fancy script was so not his style, hence the simplicity of the sentiment font

I think this is deffo. a card which will need even just a plain folded insert so the message written to the recipient doesn't show through and spoil the 'window' effect I was looking for. Funny, the photo makes the acetate look really set back in the card - not so, it's sandwiched between the front of the card and the backing which is right behind.