Less Is More - Kraft and Kreme

It's been a couple of weeks since I joined in over at Less Is More - shame on me. Happy 2nd Birthday to Chrissie, Mandi and Jen!!

As soon as I spotted this week's challenge - 'Kraft and Kreme' - I had an idea, instead of mulling possibilities over for days on end and then missing the deadline: 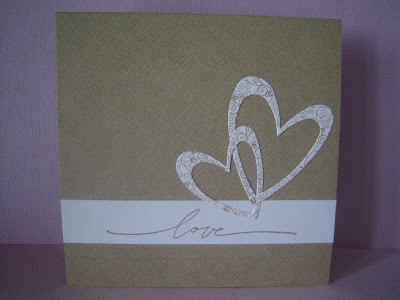 - a strip of cream card from the snippets folder, stamped with a sentiment  from SU's 'Wonderful Words' set, using Memento 'Toffee Crunch'. I'm sure I bought 'Wonderful Words' as a pre-loved SU set a while ago (sounds better than second-hand) and I love it

- double embossed lines above and below the sentiment - which don't show up in the photo of course:(

- two hearts die cut using the Cuttlebug 'Concentric Hearts' die set - same as Liz won on Saturday in the Playground. The hearts were then stamped all over using Memento 'Toffee Crunch' and an 'inchie' stamp from Inkadinkado's inchies 'Flourishes' set - did the stamping after the cutting to have a fighting chance of not having huge gaps :)

- then ran the hearts through the Xyron, cut a little slit in one and looped them together before sticking onto the card - many thanks to Kath for showing this on a card she made for the Playground a few weeks ago

Hope your week is going well!