For those who might wonder what on earth a 'spelk' is, it's a splinter of wood in Geordie dialect. And my Step Mum always says that robins have legs like 'little spelks' :) Loooooooong spelks in this case: 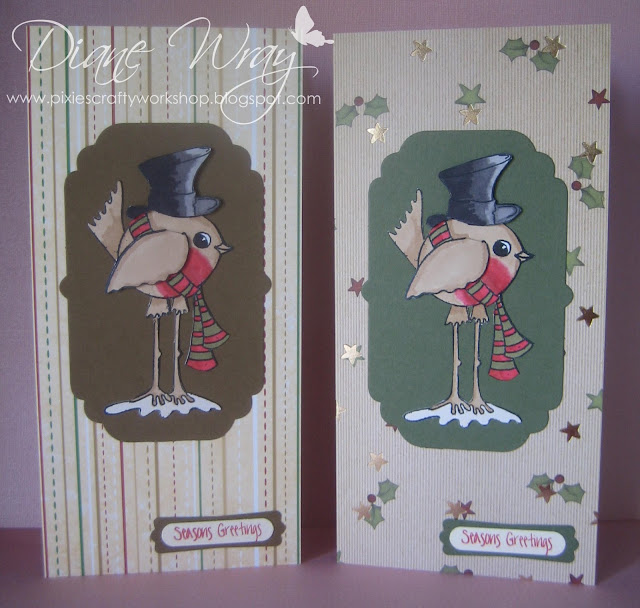 - patterned card stock, one is called 'Holly Craft' by Kanban but I don't have the name of the other 'stitched effect' one - cut and folded to DL size (approx 8" x 4")

- plain backing card behind the image, from the snippets folder

- image is a House of Zandra stamp called 'Robin' - which sadly is very disappointing when stamped as the lines have 'feathering' on. Such a shame, I tried all inks and papers but it's the stamp that's just not right. Coloured with Pro Markers with the top hat and wing stamped again, coloured and then decoupaged

Cutting out the 'spelky legged' robin was really the only option to get rid of the feathering outside of the image, and of course I had to cut along the lines - leaving a white border wasn't going to do the trick, although I do always cut along lines anyhow. A tip I picked up from Debby is to run a grey marker round the outside of cut out images, it hides any white edges  - mine is a Faber Castell Indian Ink one in 'Cold Grey' and it certainly helps, plus it doesn't bleed like a Pro Marker probably would. Sigh, but I missed a few bits :(

Have contacted House of Zandra, I bought this stamp at Newbury so they'll have to take my word for it, in the hopes that it was perhaps a faulty batch. Watch this space.

Edit: I had an email from House of Zandra and they will be sending me a replacement - apparently this is the only stamp they 'outsource'. But watch this space anyhow!

This is my entry for Rudolph Day, over at Sarn's. She has a lovely Penny Black stamp as a prize this month - hurry up, you have until Wednesday 31st July to be in with a chance!