'Yesterday - all my troubles seemed so far away'

As sung by the Beatles of course! And the whole day at Newbury Art Show really pulled me up from recent sad times - even though I DID take trouble with me :) AKA Mrs A - our Playground mischief maker, snort!

To be fair, she was sooooo well behaved it worried me a bit - if you don't count the attempt to pull over a display :)

At one point I did make the mistake of allowing Mrs A off the reins to trot off to the loo. When I followed a few minutes later she'd only disappeared! So, I went and waited in our agreed 'meeting place', chewing my lip and waiting for all h*ll to break loose in the building. Not so, an excited little Playmate appeared squeaking with delight saying she'd found a stall selling off packs of cards and also A4 sized card at £2 a shot - wahoo, that got me running I can tell you! Sure enough, there were some great deals and I also stocked up (as you do!). Err, that was round about lunchtime and with no cloakroom to deposit stuff we spent the rest of the afternoon lugging VERY heavy bargains round.

Anyhow, it was a fabulous day and we had a great time! What was such fun as well was buying (say) six for the price of five toppers sheets and splitting them, several times over needless to say!

And last week I was stunned to receive a package out of the blue through the post from Hunkydory, I'd only gone and won a load of goodies from Quick Cards Made Easy magazine :)

It was everything from their 'Shimmering Watercolours' range, tons of card stock, toppers, inserts, ribbons - and even a load of sticky pads - the list is too long to go through.

So, I just made this little card: 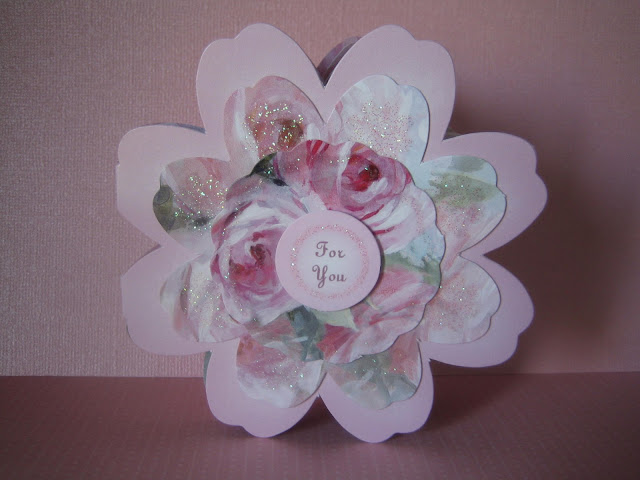 The surprise is when you open it up: 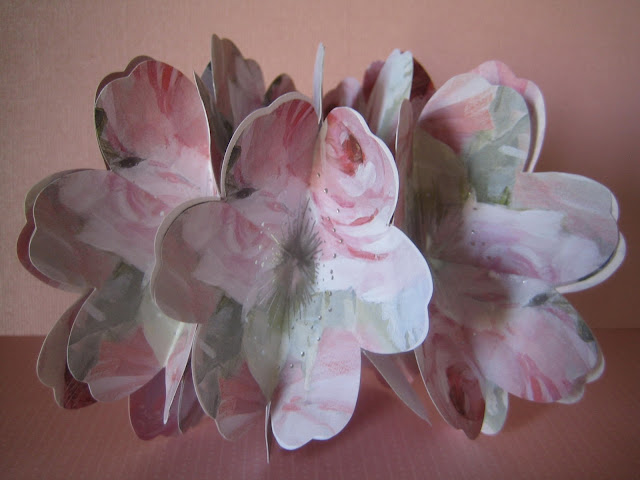 It just explodes with flowers! Not brilliantly made and I've since done some trimming but I was like a kid with a new toy wanting to try the technique out :)

And the card I'd sent into QCME? It was this 'snippets' Bargello one from Week 64 in the Playground: 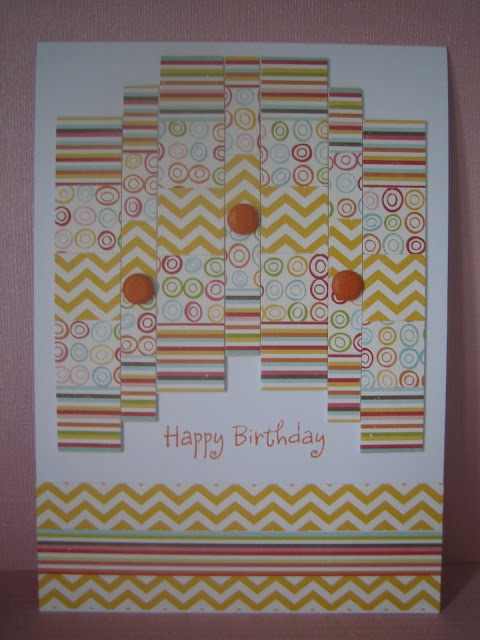 Just goes to show, if you don't enter then you're not in with a chance.

Thank you again Mrs A for a really fun day! And now I need to try and find out just why there's a parrot in the Playground :(

Sounds like a fun time at Newbury, I was gong on Saturday but didn't make it. Congrats on the fab prize too. Hugs, Amanda x

Gr8 make and well done on your bargains too

Sounds like you had a fantastic time :) What a lovely surprise winning your goodies too, that card was pretty amazing Cathy x

Had an absolutely topping time!! Thanks Di. I was like a child in a candy store when I got to open all me purchases. Did I really buy all this stuff!!! You can't blame Moley the partot on me cos you wos watching me all the time.
Well Iv'e had me playtime so work beckons. Hugs Mrs A.
xxxxxxxxxx

Glad you both had a good time a nabbed some bargains - I reckon the parrot is from Cathy's place - it would be a galah though... LOL... Mxx

ah so glad me parrot arrived - actually he really is a rainbow lorikeet, y'know..

..an' Miss, make sure you feed him well, he loves grevillea nectar - a f'vrit, but if not growing in your garden a seed mix would suffice, Miss :D

oo-arr! the day with Mrs A was fun, cant believe how good she was...

and with the tongue out of my cheek - really well done on your win both cards are wonderful creations. love Shaz in Oz.x

It sounds like you enjoyed your day! How lovely to have such a parcel waiting for you too. That's an amazing card. Was it a kit in with your winnings? I love the Hunkydory stuff, but it is too heavyweight for International posting, so I keep it for local cards. Kate x

Sounds like you had a great day with lots of lovely bargains! Well done you for winnning a prize and the card you've made with it is stunning. You'll be pleased to know the FOURTH repair man has finally mended the washing machine and I have lots of clean clothes blowing nicely in the breeze. Might find time now to play!

Congratulations Di - it's a gorgeous card. Sounds like Newbury was a lot of fun too Karen x

Glad you had a good time with Mrs A. congrats on your win and what a gorgeous card you made.
Linbyx

The parrot is absolutely NUFFIN to do with me!

CONGRATS on your QCME win with that fab card. Way to go.

Sounds like you pair had fun and picked up lots of good bargains.
Congrats on your win too.
Hugs,
A x

Well, well, well what a fabulous way to pull you from your sad times, a day out with Mrs A, would certainly take your mind off other things and the fabulous parcel arriving out of the blue, and what a fantastic card you have made with it.

I said that card was a stunner, very well done indeed.

As for the parrot, the playground seems to have more animals than London Zoo, well there are plenty of cheeky monkeys in the playground.
I hope someone is going to teach it to say "pretty pixie, pretty pixie"

Oooo! Gorgeous and fiddly card there Miss. Like it though and I can see a small scrapbook in that!
Ah so the parrot is from down under then!! I am surprised Shaz sent it packing to us!!
I am glad Mrs A behaved well yesterday! Not jealous of your bargains not!!
Hugs
xx

That sounds like fun! Congratulations on the win, Di. I love that little flower card. Clever you, it looks a bit complicated. All pink and glittery! Dee xx

I'm glad you kept Mrs. A from any major damage! I know you had a wonderful time together. I think I could hear the two of you giggling all the way over here! Congratulations on your win and what an amazing card you created. I love how it burst forth when opened! Amazing!

Sounds like you both had lots of fun Di, your card is amazing so inspiring xx

What a perfect way to bring some sunshine back to you, Di! And to get that incredible surprise package - your exploding flower make is nothing short of spectacular! - to top it off is just wonderful! I'm not at all surprised that your card (which became one of my favorite cards of yours when I saw it before) was picked as a winner!!

I am a little surprised, however, that I got away with depositing Polly (sorry, I save my originality for my cards!) in the Playground, and blaming Bonnie for it, and now seeing as how Shaz raised her hand and took the blame from Bonnie, well ... whew! How about that!

Now that means when Polly gets her feathers ruffled and lets you know the full extent of her speech capabilities, twon't be me on the naughty step!!

Hi there, Di, I'm catching up again - can't stay in for long when the sun is shining :) Sounds like Newbury was a blast, not literally but figuratively of course, and what a great idea to split the topper packs too.

Love your bursting flower card - it's gorgeous - and well done on the win - does that mean your card will be featured in a future issue of the magazine? If so, I'll look out for it.

As for the parrot, it wisnae me! Had a bad experience with my late MIL's grey many years ago and still haven't recovered :(