The other day I had reason to go right through my House Mouse stamps and, shame on me, I found a few I've never ever threatened with an ink pad before :( This particular one I used in the card below always scared me a bit but once I got going it was great fun to colour: 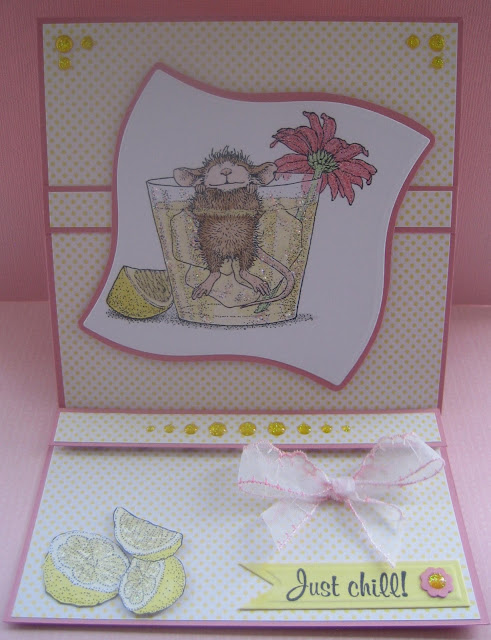 And a closer view to see if the sparkle and glossy accents shows up: 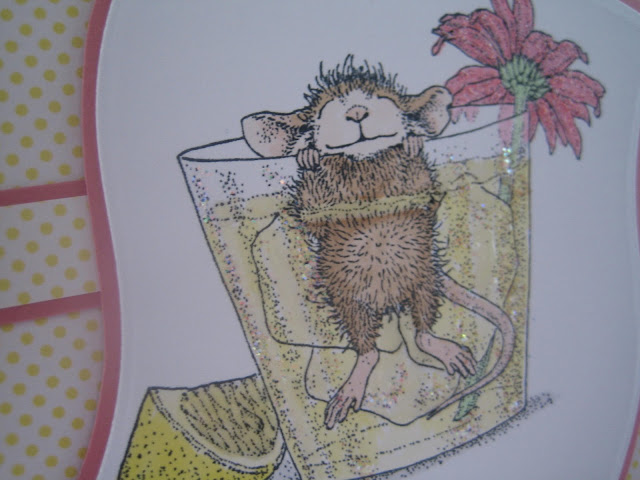 - 6" x 6" (almost) square card stock in primrose pink, I pushed the boat out and used two cards in total to make an easel card plus the backing for the image and the little strips across the card

- image is from the House Mouse 'Chill out' unmounted rubber set, along with the sentiment and the extra lemons - there's another image in the set too, available from Joanna Sheen. Image coloured with Pro Markers and tickled with 'Cotton Candy' (pink on the flower) and 'Crystal Ice' Stickles on the glass. The flesh of the lemons and also parts of the glass were tickled with Glossy Accents. Image was die cut using a Nesties 'Wonky Square' die and, as usual, the primrose pink backing was made by drawing round the outside of the die and hand cutting it

- the lemon patterned paper is by 'Back to Basics'

- sentiment was stamped and then coloured over with a 'Lemon' Pro Marker before being die cut using a Spellbinders pennant die, little flower on the pennant was punched from a snippet of primrose pink using one of SU's 'Itty Bitty' punches

- by that point I was so hot and tired my brain was frying and I stuck the sentiment - sadly very firmly - in the wrong place, leaving a big gap above it :( Tried allsorts of ideas but ended up tying a bow using some pretty pink edged lace - which originally came from the local haberdashery store

Then I shouted 'Move over' at the mouse and jumped into the glass as well!

I'd like to enter this card into the following challenges:

Joanna Sheen - Citrus Colours - that would be the lemon then :)

Cuttlebug Mania - Fun in the Sun - I hope this qualifies OK with a bit of poetic licence 'cos it's just how many of us in the UK would love to be right now. Having fun and chilling out in the sun - in something lovely and cool.

And there are celebrations over at Cuttlebug Mania - in fact I counted seven comments already left by your Snippets Playmates congratulating the team on reaching 100 followers :) It's almost like a Playground outing over there!

I think this challenge will grow and grow so why not take a peek? It isn't limited just to Cuttlebugs by the way - you can use any manual die cutting/embossing machine.