I was asked, very last minute on Thursday, to make a Birthday card for a friend's daughter. So far so good - and then, like Topsy, it sort of grew. Could I use a photo of the recipient's beloved horse, could I include her name, could I include the horse's name - and so on. With only 24 hours in hand I had a few wobbly moments, especially as (I bet you all know this) working with coloured photos on cards/layouts takes a lot of colour co-ordination or at least avoiding clashes - and frankly stresses me out. Anyhow, this was the end result: 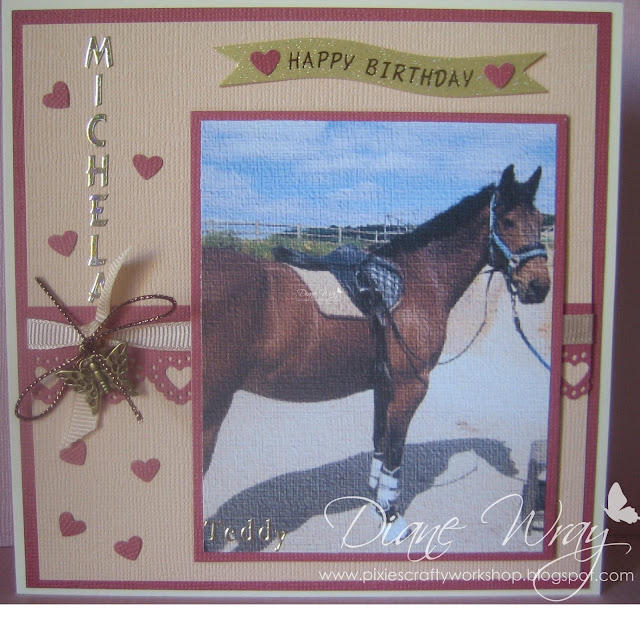 And, as the card is being smuggled on holiday by the recipient's daughter 'cos they will be sunning themselves abroad for the celebrations, I thought a sturdier envelope than usual was a good idea :) 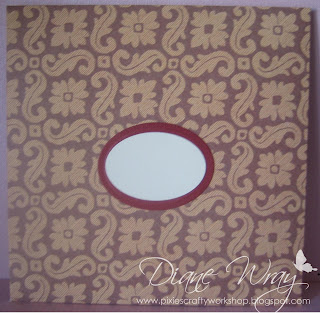 - a photo of 'Teddy' which was hurriedly emailed to me. Cropped a bit, re sized and then a canvas effect applied. At this point my printer started to play up, sigh, so I had to use Len's printer (thankfully using wi-fi) but of course there was a bit of trotting to and fro to collect the printing :(

- Core'dinations card for the backings and the strip of card underneath the ribbon, punched using Martha Stewart's 'Lace Heart' edge punch

- a snippet of ribbon across the punched strip, little tie of ribbon then a brown cord bow to fasten a butterfly charm in place

- peel offs to spell out 'Michela' (and it's the correct spelling!) and 'Teddy' - isn't he a splendid chap too?!

- the envelope was made using a 12" x 12" sheet of card/thick paper - a lucky find really, topped with two ovals for Michela's name when her Mum writes the card

When I'd finally finished Len said 'Now I think you ought to brush your hair and come and have a glass of wine in the garden'. What a fright I looked, in the heat I'd been running my hands distractedly through my hair as I fretted and worked - it looked just as if a couple of birds had been trying to build a nest!