I wanted to make some little cards to include with the 'Lattice' Embossing Folders when I sent them to the Playground winners - but they had to be quick. Then I thought of the image I used today - which says it all really 'cos without you Playmates being so supportive of one another and coming regularly to play, there just wouldn't even be a Playground: 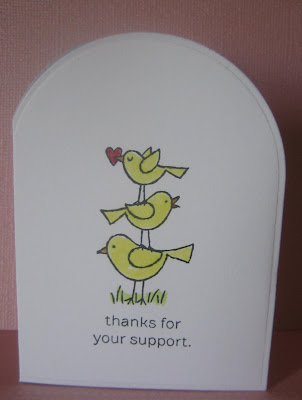 It's just a small card size - just over 3.5" x 2.5". I chopped down some DL cards which arrived here with one corner crumpled (dontcha just love it when things are badly packaged) and got two little ones out of each DL card.

I recently had to return a big package of 12" x 12" Core'dinations card stock - it arrived just in a big padded envelope (a box would have been much more suitable) with no additional heavy weight card to protect it, and not even the words 'Please do not bend' written on the flipping thing. Our own postman (who knows I buy a lot of craft goodies and is always careful) was on his hols so his enterprising replacement only folded the very fat package in half to squeeze it through the letter box here! To be honest I suspect it hadn't travelled well anyhow, but that sure was the last straw for it - he must have really forced the thing through the letterbox too :(

Anyhow, back to the card.

- a die from the 'Rounded Banner' set by MFT Die-namics, placed so it didn't cut off the folded edge. These are super dies - and once again it was my bad influence Amanda who 'forced' me to buy them :)

- stamp from SU's 'For the Birds' set, coloured with Whispers pens so there was no bleeding through the card

Those little SU birdie stamps are super fast to use as well 'cos the sentiment is part of the same stamp.

I'm entering this into the current Less Is More challenge where you have to use a shape other than a square or rectangle - plus it's 'one layer'.