don't go out in the midday sun, instead they sit in a craft room with a fan blowing hot air round the room, making Christmas cards: 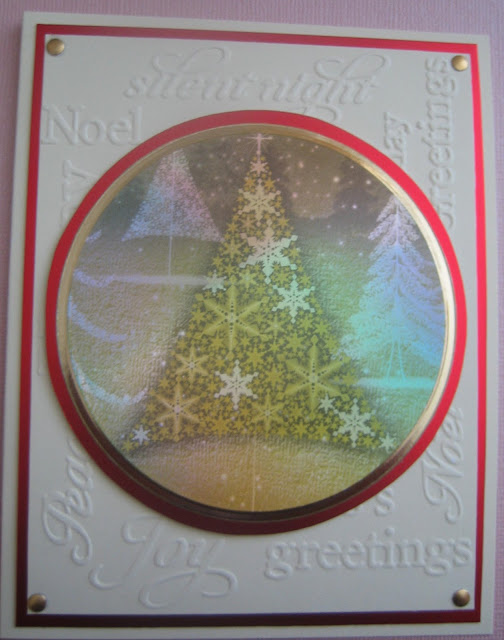 But, I didn't want to miss my weekly entry for Craftyhazelnut's Christmas Challenge, which is 'Trees'. I did then have to trot round the house to find a spot to take the photo - who would have thought that a holographic image and some embossing would be so darn 'ornery' to photograph! And of course this card is also for Craftyhazelnut's Christmas Challenge Extra for July, where it's always 'Anything Goes'.

- the same cream card to emboss a backing using a Quickutz folder - bought before I had the sense to write the names on in permanent marker :(

- image is by Kanban - another bargain from Newbury - from their 'Golden Christmas Trees' set. I made two card the same (yay!) and found that one was badly die cut with one side a bit 'off' so I just used a circular die to create a properly positioned circle from both toppers to keep them the same (bit of OCD there)

- that also meant I could then draw round the outside of the die onto the reverse of the red backing card to then cut a slightly larger circle, and the same backing card was also used behind the embossed layer. Shame to cover it all up really as it's 'red satin mirri card' and has a lovely soft sheen rather than 'in your face' brightness. Also made by Kanban and rare as hen's teeth I'm afraid

And that's a total of 49 Christmas cards all finished and packed away. Plus, the topper sheet has enough of those gold die cuts left to make a further four cards - two with matching sentiments - which will be done ASAP. Bargain!