Last week it was a special bloggy friend's Birthday - and she loves to bake, and does it very well too! So, I faced up to colouring one of those NBUS stamps by LOTV - the detail in the image had worried me I confess: 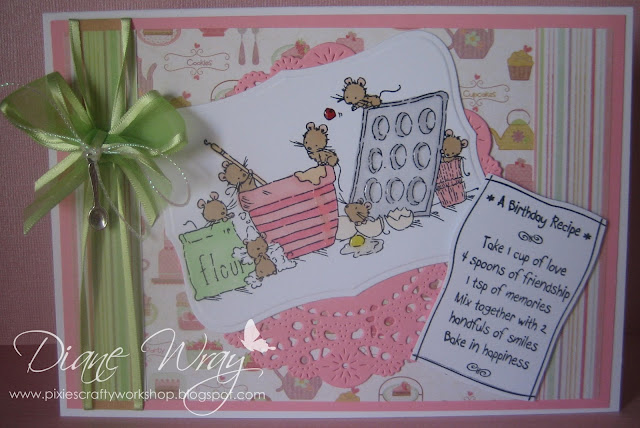 - image is LOTV's 'Mix it and make it', coloured with Pro Markers and die cut using a Nesties Labels Eight die then tickled with Glossy Accents on the cherry, egg, bun/muffin tin ...  and a little trickle down the bowl as those meece seem to be very messy workers :)

- pink backing card from the snippets folder, both behind the patterned paper and to die cut a doily using Cheery Lynn's 'French Pastry' doily die. I used some of the waxed paper I recently bought online from Joanna Sheen here (having been advised by my trusted 'personal shopper' Mrs A at Newbury that it was overpriced there - too right, I think it was almost double in price compared to Joanna Sheen's shop) - and the cut card fell out of the die like a dream! Hopefully no more struggling with fancy dies here - it's great stuff

- patterned papers are 'name unknown' from a selection sent to me by the lovely Dee, I added a little striped strip at either side to fit the card and also to make a cleaner line behind the ribbon

- sentiment is also LOTV - one of their 'Recipe' sentiments

- organza ribbon came from my ribbon box, it was wired but that was easy peasy to remove. A little 'spoon' charm (thank you Jules!) was added with iridescent cord, tied into a bow

Hope you had a fabulous day sweet friend!

Stunning card Di, I agree that these meeces are a frightening lot to colour, I have this stamp and the chocolate one and only been brave enough to colour them once or twice lol, Hugs, Amanda x

What a sweet card, and perfect for a baking friend. Loved your CL die. Glad to hear your new waxy paper helped you release from the die. I've had some good word sessions with some of the CL doily dies, which is a shame, cuz they are gorgeous. Perfection on this particular card too. Good for you that you have a savvy shopper as a friend. (Even if she is deadly with that w/pistol. Keep on her good side if you can!). TFS & Hugs

Beautiful card Di - you've coloured them beautifully so you need not have worried. I am swooning over your doily die - that's stunning! Congratulations on the JS challenge too - nice to see you being rewarded for such lovely creations Karen x

p.s. those papers may be dove craft

The doily die is a keeper...so beautiful and delicate. The image is so fabulous...but hard to colour I think! That teensy spoon is fabulous and love how you tied it on...Jules style!

I love all the elements of this card.I don't do a lot of 'cute', but if I am going to, LOTV would be my first choice. Kate x

Those little meeces are so cute and beautifully coloured. That ribbon is lush too x

Awww, love this Di. I love these little mice images. Great layout and design and I love the little spoon you added.
Hugs
Caz x

What a great card Miss. Love that stamp and the sentiment is wonderful. NEED that doily die. That charm is lovely.
In all....I Like it....A LOT!
Hugs
xx

Oh so sweet! Beautiful Di, love the little meeces. Beautiful LO, the ribbon and charm are a great finishing touch.

Meeces to pieces they are cuties but I needed me maginfiying glass to spot em!! I used my wax paper for the first time the other day to cut some doilies too!!!!!
Erm what you done with the wax paper cut out den. You not throwd it have yer? Kept mine and I used em up too!!
Hugs Mrs A. (from under a pile of emails)

Lovely card, Di. The mice are so cute and I like the doily type die-cut, very pretty. The ribbon with the little spoon charm is a really super finishing touch. Hugs, Elizabeth xx

Oh forgot to say the perfect layers does require a knife and I use the fiskars finger knife, I am notoriously bad with craft knives and have had quite a few accidents but not with the finger knife, probably cos you can't drop it lol. Hugs, Amanda x

This is so delicious, Di! Such pretty colours, and wow, the bow is just LUSH! Beautiful!

Brilliant card, love it, swooning here at the bow, no I am not jealous, ok, yes I am!

What can l say? I LOVE it! The theme is perfect, colouring is amazing and the icing on the cake is the teeny spoon.

It's very clear that you've put a lot of thought into this card, something that means a great deal.

This is really pretty love the doily punch x

A darling image, Di! And I love that green and pink!

Awesome NBUS, my friend!! This card is so fun and your coloring is perfect! I'm glad you mentioned that sweet little spoon as I hadn't even noticed it! Just too cute, Di!!