On Sunday, at Newbury, I found loads of stands selling toppers at six A4 sheets for £5 - instead of around £1.69 each.........bargain :) So, I duly trotted round selecting three (or even six) each at a few stalls, and quite a lot of the sheets were Kanban ones. I fell in love with the 'Simply Fabulous' sets at the very first stand I encountered and this card used one of the toppers: 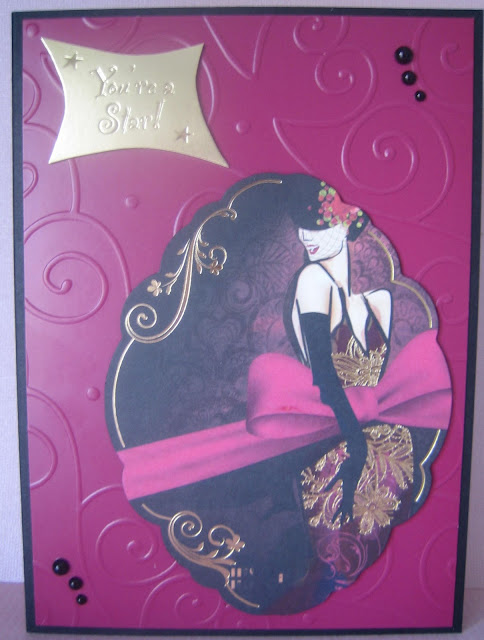 Neeldess to say, it was really tricky to photograph though!

- 5" x 7" black card stock, trimmed down from 7" square as I figured the embossed backing card would go further - am such a meanie at times

- topper by Kanban from the 'Simply Fabulous - Burlesque Blush' sheet

- ha, and then I found that the matching sentiments sheet I'd bought was largely badly foiled (some you win and some you lose) so a quick rummage through other sentiment toppers turned up the plain gold one I used - aptly with the sentiment 'You're a star' as she really does look such a Diva