And it's another week of lovely makes in the Snippets Playground! I do apologise for slamming the gates shut 12 hours early - my fault entirely, I did re-open them for another four hours as soon as I realised. And, if you did get shut out you can always back link by a day or so for this coming week. I hopped onto the naughty step - had to get a few of you to move over to make room for me! 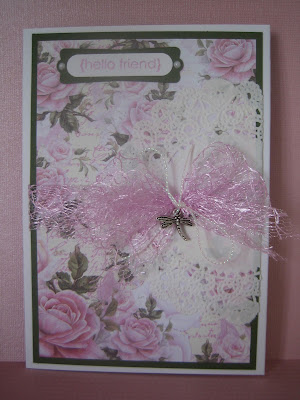 To be honest, only the green card, a little bit of white card and the pink  'cobweb' ribbon are snippets but I did so want to try out using a doily as shown in this month's Quick Cards Made Easy magazine by the very talented Katina. I love the doily idea - a quickfire way to giving a vintage look.

- a little white doily, run through the Xyron and then folded around the right hand side of the matted green card and patterned paper

- a snippet of sugar pink 'cobweb' ribbon, wrapped round and tied in a bow. Tip: it's quite wide ribbon so I folded in in half length ways, did a half knot and then fanned the ribbon out to its full width before tying the bow. In this instance I tied the bow by doing it on the 'spine' of the topper and gently working it across the card by slightly 'bowing' the card to make some leeway.

- the topper was then stuck onto the A6 card and a little dragonfly charm added, using pearlescent cord tied on a bow round the cobweb bow

- another green snippet was punched using SU's 'Modern Label' punch, the sentiment was added and just a couple of small self adhesive pearls

I'd like to enter this card into the current challenge over at  Pan Pastel, where this week's theme is In The Pink.

Well, we did have some excitement here yesterday girls. I had an excited text from Hettie (aka Sam) saying that decopatch was being demo'd and sold on Create and Craft TV. I love decopatch, it's so relaxing to do, so I raced and put the TV on whilst making breakfast. The first thing that caught my eye was a mahoosive cow all covered in decopatch - not unlike this one: 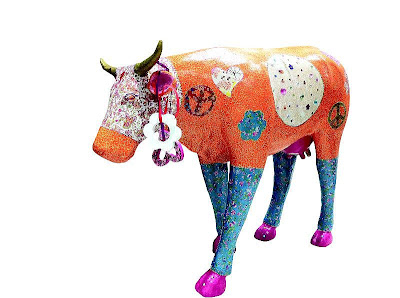 I suggested to Sam we could have one for the Playground, which started a little series of 'What would we call her' emails - then Sam pointed out it was a bull 'cos it has horns. Someone needs to tell her about the birds and the bees 'cos I don't think she noticed the rear end and the 'milking gear' in all the excitement :) By the way, you can buy this here - at under £180.00 even!

OK, so who's been doing what this past week then? 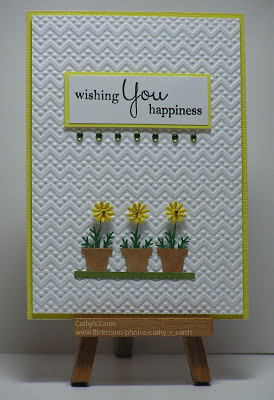 First into the Playground was Cathy, with this really super little row of pots and flowers. 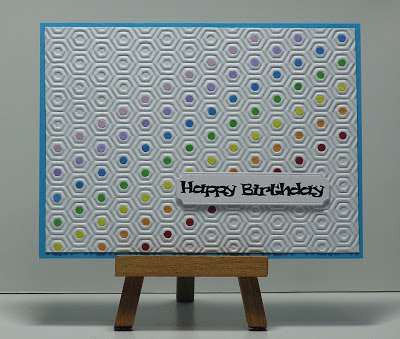 And how about this for another one from Cathy - a rainbow of one eighths of an inch diameter dots! I think this week's gold star for the teeniest snippets goes to Cathy! 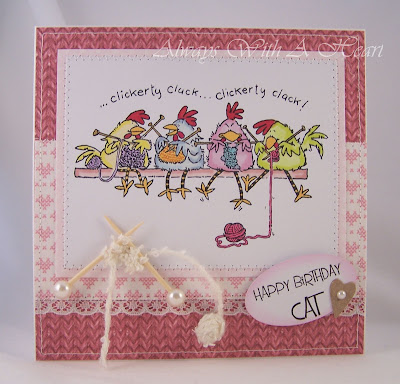 Jules really stole the show for ingenuity here - and unable to find her fine knitting needles she actually did the knitting straight onto the cocktail sticks :) OMGosh - I just properly noticed the backing paper - now how totally cool is that?! 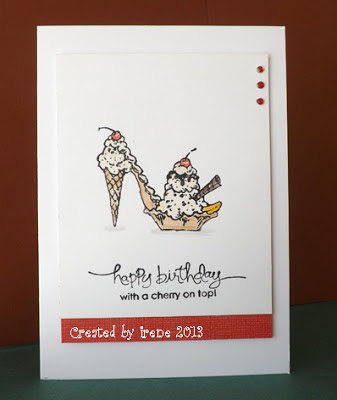 Just a red snippet here from Irene, although perhaps the white background is also a snippet - but I really thought you ought to drool over the amazing shoe! :) I neeeed that stamp, it's brilliant.

A really fast show and tell this week - but to see more of course you can still use the links from last week, there are loads of super makes to get inspiration from.

Now for the draw for that fabulous 'Water Droplets' stamp (plus the fish one). Ryn popped in to say 'Hi' during the week - and is interested to know the outcome of the draw so, with no more ado, it's:
Karen P

Well done Karen, I just know you'll love the water droplets stamp. Do drop me an email with your snail mail address (to di_wray@hotmail.com) and the stamp (plus the fish one) will be in the post ASAP.

And now to this week's prize, which has been donated by our lovely Patron and Founder, Jules. As Jules is the Queen of using charms in card making it's totally appropriate, and so kind - thank you Jules: 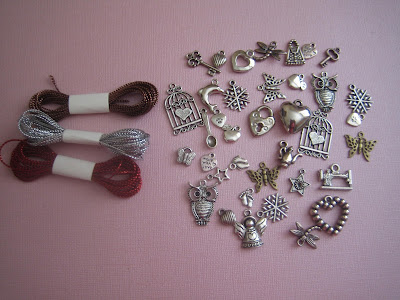 What a gorgeous selection - I thought I had quite a few charms but Jules seems to have a secret source 'cos I haven't seen most of these little beauties before - and of course there are a few hearts!! In fact, spookily, I do have the dragonflies - and even more spookily I already used one of mine earlier in the week when I made today's snippets card. And that was not even knowing what a lovely little package for the 'Playground Toybox' was about to drop through the letter box at the end of the week! The cord is fabulous too - Jules uses it loads and I picked the trick up from her - in fact I do blame Jules for a lot of my spending :)

The Playground is open all of this coming week, will close on Saturday 18th May  at noon UK time and Mr Linky is below as usual. I'll make sure I get it right this week! Just enter a snippets make into the Playground this week and I'll do a draw after the Playground closes next Saturday.

As usual I am asking for a snippets make please, maximum of three entries and please say 'No thank you' in a comment if you wish to still play but not be a winner of  the lovely charms and cord donated by Jules.

Have a great week - and no bringing a mahoosive decopatch cow/bull or whatever to the Playground please, it might scare the ducks!