Oh boy, now I just can't get that Christmas song out of my mind :(

The current challenge over at Crafty Hazelnut's Christmas Challenge is 'Festive Food and/or Drink'. I didn't have any festive food/drink stamps or images to hand - then 'Ping', on went a light bulb and I remembered the lovely Bugaboo Digital stamps I won not so long ago - from Hazel herself. Now here's a confession, I'm not normally keen on digital stamps - can't really say why but perhaps it's that I like my stamps to be tactile, but I was delighted with my win and this challenge spurred me on to pick an image I'd chosen from Bugaboo, re size it and have a play. I hope it qualifies as Festive 'Drink' - or should that be 'Festive Drunk': 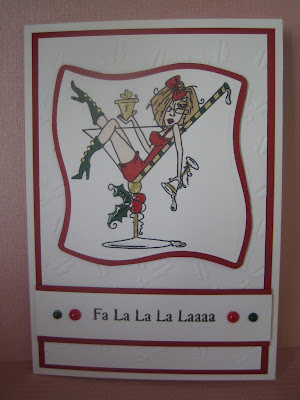 - SU's 'Riding Hood Red' card stock, one layer for the main part of the card and another behind the wonky die - again just by drawing round the outside of the image die then hand cutting

- red and green pearls either side of the sentiment, which I'd really dithered about until my 'in-house critic' returned from playing at being Robin Hood archery with his opinion. The green pearls were coloured with a Pro Marker 'cos despite a mahoosive box of gems and pearls there wasn't a dark green one in sight :(

I know quite a few people this card would be great for - one prime candidate is my hairdresser - this gal looks so much like her! Not that I've ever seen Jane the worse for wear, it's the features and her specs :)

And I'd also like to enter this into Craftyhazelnut's Christmas Challenge Extra as well.

I think I'm a bit converted to digi stamps - they can be really useful. But no worries - I won't be selling my umpty-million 'ink and press' stamps for a long while yet :)