Although not a truly naughty kid, I did end up in pickles at school, mostly through either talking too much or giggling.

In the late afternoons, once lessons finished and we'd had tea, there was a gap before it was time for supper - which was then followed by prep. time. The school deemed that we had to choose at least a few extra-curricular activities to fill up most of those late afternoons - they sure kept us busy there! Sport was top of my list - especially during the warmer months as it got pretty cold on the North Sea coast of Germany. One Winter term I got terribly excited about some new indoor lessons though - in fencing!! Whoop, whoop - now, that was much more like it! 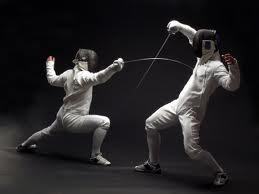 I signed up immediately! We spent what seemed like endless hours learning the moves plus the correct names and terms before even being allowed a sniff of a foil, but I just loved the pure elegance of the moves - a bit like 'ballet for fighters'.

After a while, the big day eventually arrived and we raced off to get all geared up. Now, in those days, fencing apparel was nothing like it is now - as I was soon to learn. My pal and I found a couple of jackets - hers was a good fit, mine was too large :( Undaunted though, I carefully turned the cuffs back and then we were shown the 'additions'. WHAT? Tin saucer things, and you had to put them WHERE? In my haste I shoved the pair of saucers up inside the front of the jacket and scampered off to join in the fun.

We dutifully lined up and were finally given our foils to hold - after another safety lecture. On went the masks - ooer, beginning to look 'the business' here I thought. We lined up, raised our foils in salute and then it was lights, camera, ACTION!

Yeah, right! Remembering the previous lessons, back and up went the left arm, gracefully curved in one of the more balletic poses. Feet in position at 90 degrees, knees bent and foil arm outstretched - then 'Lunge' came the order. Left arm was sharply brought down to counterbalance the lunge - and then it all happened. The left hand tin saucer promptly popped up and partially out of the neck of the jacket, walloping underneath my chin. A squeak of pain and sharp intake of breath, meaning that said jacket was even looser for a moment, and the right hand tin saucer then decided to make a bid for freedom - choosing the bottom of the jacket as an exit point. With a clatter it hit the floor, rolled a few feet and then merrily and very noisily spun round for ages before finally grinding down to a halt. By this time the mask was off and yours truly was gawping in horror at what had just happened before dissolving into embarrassed hysterical laughter.

This was absolutely not good etiquette and it was tersely explained that you didn't just 'shove the tin saucers up the jacket front and hope for the best', apparently there were pockets inside the jacket for them to be placed in :) Unfortunately, the laughter merely subsided to uncontrollable giggles which just wouldn't stop so that was another exit for me - shame, as I truly was keen!

This incident was brought to mind when we were watching a James Bond film with some fencing in the other evening and later on, having already told my OH about the incident, he was in bed and heard me scuffling around on the landing in front of the full length mirror there.

Next thing I knew, he was looking out of the bedroom door demanding to know what on earth was going on. 'Err, just wondering if I could remember the correct fencing moves' I replied, followed by a quick demonstration of 'en garde, lunge and parry'. 'And anyhow, I bet Errol Flynn practised his fencing moves in front of a mirror' I added defensively.

With a sigh Len said 'I doubt if he'd have been wearing pink fluffy slippers, a Winnie the Pooh night shirt and hopping about brandishing a hair brush instead of a sword though!'. You know what, sometimes he is such a 'party pooper' :(

Di, I do so love your stories, they cheer me up no end and I can visualise them so clearly. Hugs, Amanda X

You paint such a wonderful picture Di. I am sat here having a good giggle. Thanks for that.
Hugs,
A x

Oh Di - this is hilarious!! You have really made my day, and I can't stop chuckling!! What a great sense of humour you have, and you sure know how to tell a good story! Thanks so much for sharing!

FAB , made me chuckle .Hugs Elaine

Oh my, you have me rolling around laughing and the family think I have finally gone mad!! Pssst....Len, have the camera ready next time, pretty please. Take care, Lyn x

Oh I can just imagine you as a naughty schoolgirl. If you were anything like me, you got away with a lot more because "she'd never do anything like that"...little did they know...LOL!!!!

So funny, Di - I can just see it all :) Did you know that fencing is having a bit of resurgence ATM - and it does look so elegant. Your 'ballet for fighters' analogy conjures the effect up perfectly - until you get to the fluffy pink slippers, that is :)Another Tuesday brightened up considerably, many thanks. Elizabeth x

This has really cheered me up. The image of the pink fluffy slippers just made it for me. My nephew (of 40 ) fences so I have a vague idea of the sport. You tell a good tale - hope you're writing your memories down for your children/grandchildren. There too good to just get lost in time.
x TRicia

Love it Di the silver saucers heading in all direction has us all in a fit giggles too! and dont know why more girls did not end up out the door for giggling that day - lovely vision of Winnie the Pooh in pink fluffy sippers - off to join the playground once have my post done! grabbing my pogo stick and leaving at the door! :D Shaz in oz.x

Bit late visiting everyone today . . . but it's a good job there's no-one in the office to see me collapsing at my desk with a fit of the giggles and tears in my eyes. It wasn't so much the saucers that did it for me . . . it was the Len's glib comments on your new fencing appareil.

PS: I swear by Pernaton for strained muscles! Very effective. Get some! xxxx

Hee hee. I can just picture you practicing in your lovely pink slippers!

Something similar happened to me - involving a cup, kind of. I was the statistician for the baseball team. During one of our away games the pitcher came and sat next to me before the game started. He left this round thing next to me and I didn't think anything of it. Next thing I know he's asking me to bring it to him on the pitcher's mound, so I did. Then he stuck it down his pants!!! Yep, I turned red and he got some laughs!

Brilliant story Di, you have me in fits of giggles.

Thanks for the sympathy my lovely friends :( Snort, snort!! Di xx

What are you like, lol, I suppose next week it will be pistols at dawn or you have run away to sea.
I can also imagine you in the bedroom with the hair brush as a microphone.

Di, just picked myself up of the flor where I fell of me chair from laughing so much. You and your stories! Keep em coming. hugs Mrs A.

Brilliant Di as always .. .. I can picture everything so clearly from your stories.

Love the thought of you in your pink fluffy slippers and nightshirt with your hairbrush!!!

You could be a cartoon character!! LOL!!!

Oh my god had a go too for some odd reason I seem to remember wooden chairs, did we think we were errol flynn

i must have missed this yesterday di, a hairbrush i ask you, not even a poker! would have loved to have been a fly on the wall. hugs heid x