Ha! Today's recipe was meant to be a cake. I baked it and then the two-legged mouse went in for the kill - big time! Ooops, cake almost demolished before I had a chance to take a photo :( A swift re-bake hasn't happened yet, but should be done ready for next week.

Meanwhile, today's recipe is fish, despite not being top of my list of favourite foods. The two-legged mouse loves fish though so I have to find recipes that I'd like and experiment a bit - this one was a hit earlier this week, even with me! 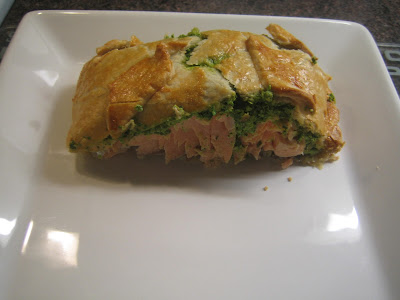 For speed I used Jusrol frozen pastry - you could make your own of course, if so it's better to use butter for added richness.

The mascarpone cheese and green leaves purée is a lovely counterfoil to the sweetness of the salmon and pastry, but do be aware that rocket, watercress and spinach are all quite bitter leaves so you might want to reduce the proportion of leaves to cheese.

I served this with new potatoes and asparagus - and managed to fight the two legged mouse off long enough to take the above photo :)

Salmon en Croute does it for me Di. Thanks for the recipe. What a chef you are :-)
Hugs,
A x

I don't like salmon but I think this would make a great side dish if I left it out.
My two legged mouse burnt his tongue on an apple pie the other day. Told him to let it cold but he just couldn’t do it.
Your Tuesday tale worked on my mind till I finally had a chip butty for lunch today. Yummy!
Hugs
Bernie

That looks really tasty Di, I'm also not a fish lover. If it tastes fishy I don't like it but if it doesn't I'm ok. How stupid!
Hope you enjoyed xx

So tasty looking is this weeks dish Di, l will have to try this one as l have done most of your other dishes l really look forward to your recipes have a great weekend:)

Hello Di,
Oh, I do love me some salmon! I did a blackened salmon last weekend. Yum. Your photo looks delicious.

It's snowing here (again). I do see a ray of sunshine though.

Looks fab but I think I would prefer fish and chips, love tinned salmon but not fresh, strange eh?
Becareful how you answer that!

I love salmon this looks soooo yummy!! Will be giving it a try, Hugs May x x x

Now look I'm on my way to the playground (cos I'm late again) and have had to make an unscheduled stop. My nose and eyes spy Salmon en Croute!!!! Anything fishy in this house is eaten before you can slap a wet fish around.
Just sticking the bottle of wine in the fridge as we speak and then will be straight over for a bite (seeings as howIi know your local now!!!!!). Hugs Mrs A.

p.s. that should read of course
how I not howl though I will be doing that if youve scoffed the lot!! Howls Mrs A.

Very yummy looking - love salmon and rocket is my all-time favourite green so this is one for me - with Jusrol, life's too short to make my it myself :)) Elizabeth x

This is exactly how I make it too!
Try adding some pine nuts to the spinach mix sometimes. yum!

Mines a cooking as we speak. The Doc has the wine in the fridge cooling!! Will send a piccy of it down the air waves to you when its done.
Hugs Mrs A.