With the current gorgeous weather in the UK, this is a tasty and easy to make meal - and if you don't like capers then I'm sure you could leave them out, they add piquancy (a big word, haven't done one of those for a while) and we love them though. 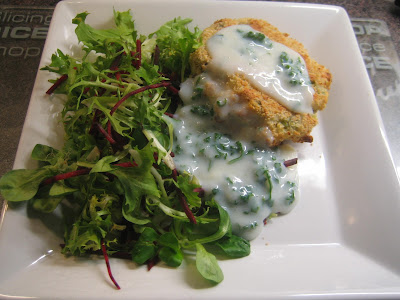 I plonked added a second fishcake onto the plate after taking this photo :)

For the sauce:
300ml skimmed milk
2 level tbsp cornflour
2 level tbsp chopped fresh parsley
Salad, to serve
Baking sheet, either a non-stick one or with non-stick liner or baking parchment

To make the fishcakes: Put the mashed potato in a bowl and beat to soften it slightly. Flake fish and add to the potato, along with spring onions, capers and seasoning and mix well. Divide mixture into 4 and shape each portion into a round, flat fishcake.
Tip the egg into a bowl and spread the breadcrumbs out on a plate. Dip each fishcake into the egg, then the breadcrumbs. Re-shape them if necessary. Place them on a board and chill in the fridge until firm.
Set the oven to 200°C/400°F/Gas Mark 6.
Place the fishcakes on the baking sheet and cook them for 20-25 mins or until they start to turn golden.
To make the sauce: Do this just before fishcakes are ready. Pour milk into a pan and bring it to the boil. While it’s heating, mix the cornflour with 2 tbsp water. When the milk reaches boiling point, gradually pour in the mixed cornflour, mixing well to give a smooth sauce. Simmer sauce for about 1 min, then stir in parsley and season to taste. Keep sauce hot until serving.
Remove fishcakes from oven and turn them over before serving, as the bottoms will be more golden than the tops. Serve with a little sauce spooned over (and the rest in a jug), and salad.


Things I do: I made this for the first time very recently (it's on the menu again tonight or tomorrow though!) and, although you could either use leftover 'real' mashed potato or a carton as suggested, I used frozen potato which worked brilliantly. Just either let it thaw at room temperature or defrost it very slowly in the microwave. You don't want to be working with hot potato here and it's also better to work with cool fish. I poached the haddock fillet in milk and a tip for poaching fish in milk is to use made up dried skimmed milk - I make it quite watery and that keeps the calories down even further. The cooler the fish and potato mix, the easier the fishcakes will form. The chilling before baking in the oven is also well worth the extra 10 minutes or so, I think it helps to stop them 'collapsing' a bit although they would taste just as good, you can clear the cooking space during that time :)

Am I the only one who gets moaned at for dragging every bowl and utensil out to make the simplest of dishes? Need a knife? Whoosh, go grab a fresh one.

I'm trying out a cake recipe this afternoon for Friday Feast - and am waiting until 'someone' is out at archery. That way I can be as messy as I like and hopefully have cleared all the evidence when Robin Hood returns home.
Yummy fishcakes though and well worth trying - enjoy!
Di
x
Posted by Di at 06:16

I have to admit I am as OCD in the kitchen and try to tidy up and clean away as I cook [think it's a throw back from school days and a strict home economics teacher!].
Love today's recipe...it's been years since I made fish cakes so I just might have a go.
Hugs,
A x

They look delicious and that sauce recipe is well worth a go.

Mmmmmmmm nom nom - they sound (and look) wonderful......can you send them in the post in time for tea???

Sounds and looks absolutely lovely. I love a good homemade fishcake but I've never heard of mashed potato in a carton, or frozen for that matter! Smoked fish isn't something you'd normally find in an American supermarket though unfortunately, but if I find something I'll definitely give this a go.

Hi Di, this looks yummy and definitely one to try for myself. One of the reasons the EM does most of the cooking in this here household is that he thinks I can't cook without using every bowl and utensil in the kitchen :) I do try to clear as I go but usually end up abandoning the effort halfway through because I've filled the drainer :( I've just read Brenda's comment and am amazed that smoked fish is not found in American supermarkets! Elizabeth x

I will definately try these fishcake but will not use smoked haddock as I think the Grandson's would love them as they love haddock and they also love mash so combining the two should go down well.