A Tuesday Tale - you just can't get the staff

....and I'm debating whether to sack our gardener or not. He worries me when he dons his hat with 'Head Gardener' on - it's almost as if something slightly manic takes him over (maybe I should just throw the hat away, that might be the cause).

We have a mahoosive evergreen bush in the garden here, it really should be removed and the whole border then replanted. But, we have (no kidding) a fully resident blackbird, wife and family - year after year. Plus sparrows and a robin. So, for now the gigantic bush stays but it started to die off a few weeks ago - right in the centre parts so clipping the dead branches off was going to leave huge holes.

Then, one day about two weeks, ago Head Gardener said 'That bush is getting new growth - go take a look': 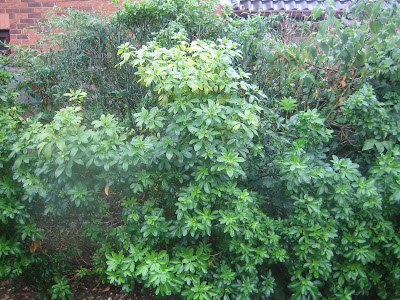 Well, I'll be blowed - sure enough, those brown twigs were now green. Then I looked a bit closer - Head Gardener had only been rootling round in the shed and found an almost empty spray can of green paint and had been renovating the bush with it!

In fact, I hate to admit it but it's done a temporary job - and the birds have accepted it really well.

BUT, and this is the bit that really worries me - Head Gardener then jumped into his car and whizzed off to a DIY store to buy more green spray paint so he could finish the job off properly :(

Apparently he once made a garden strimmer by using an old spin dryer motor attached to a pole. Barking, totally barking - Heath Robinson strikes again!