I almost lay down on the floor here and threw a tantrum when I realised that Sarn wanted SIX cards for this month's Rudolph Day challenge. In the end I caved in, wouldn't wanna miss the fun, but did take the option of making six almost the same, only the sentiments vary slightly: 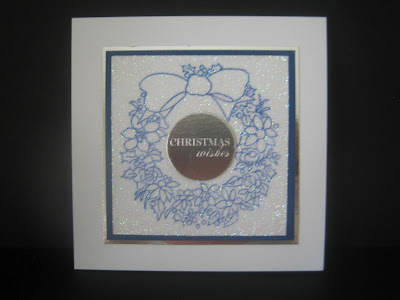 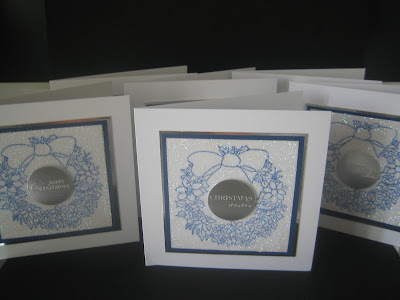 I promise those cards at the back aren't just blanks, didn't feel up to climbing up on a chair or stepladders to take a photo.

- blue and silver card as backings

Another six for the box Sarn - what's coming next month then?

I'm also entering this into this week's Crafty Hazelnut's Christmas Challenge which is to 'Get Inky'. Wonder if getting covered in glitter along the way gets extra brownie points? :)

I waited all day yesterday for my new laptop to arrive, it turned up at about 4pm and I swear the driver was grumpier than Shrek - he also looked a bit like Shrek. He practically threw the box at me but I did thank him nicely, in between jumping up and down like a kid at Christmas, and he just thrust the electronic signature machine at me and barked 'Sign 'ere', sigh, how unpleasant. He grabbed it back and off he marched, something had obviously gone wrong with his day :(