Quick one today. Many years ago, whilst I was a very short term office junior at the electricity board in my local area, the TV programme 'Dr Who' was all the rage. We had a dishy electrical engineer called Bill working there, married with a young son - sigh, off limits :(

One Monday Bill came into the office very sheepishly with a huge round red blotch on his forehead. When we asked (we were a nosey lot and not much missed us) this is what had happened: 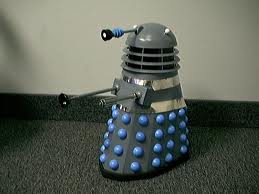 Bill's little boy had been entranced by Dr Who on the Saturday and at bedtime Bill decided to play games with him. Silly man found the kitchen sink plunger and stuck it onto his own forehead whilst chasing little boy round the bedroom. 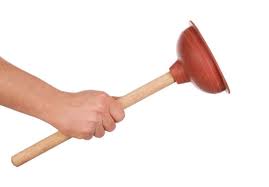 Ha, ha - when the time came to remove said plunger, it was firmly stuck to Bill's forehead :) Instead of easing one edge away, his wife grabbed the handle and put her foot against his chest and heaved like mad! Hence the broken blood vessels and one very dishy but silly looking office heartthrob :) Snigger!