A Tuesday Tale - The night an alien landed in Hampshire

Shame I couldn't take some video of this tale, but it does tickle me and is worth relating.

Anyone seen the film 'Batteries not included'? It's one of my favourites and never fails to make me smile: 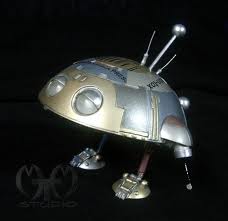 The gist of the story is that some harmless little aliens (see picture above) land in New York - very cute film too.

On Friday night, with me trying to get some much needed beauty sleep before the School Reunion Marathon, we woke up at 2am in the morning to a bit of a racket. Sort of shuffling and banging noises coming from the back garden.

I've said before, we feed the hedgehogs here, and as the birds pinch their food during the day we cover the bowl of dry food with a shallow plastic bulb planter, not unlike the shape in the image above. But, we'd forgotten to uncover it on Friday night :(

When we went downstairs to investigate, the outside lights were ablaze having been triggered by something. And, there it was, the uncovered dish of food where it should be and the upside down plastic bulb planter running round the garden paving!

I wanted to go and get my camera and do a little video clip, but Len insisted that rescue must commence without delay - what a party pooper he is sometimes! So, Muggins here was sent into the garden and sure enough, I could see feet trotting around with the planter on top and when I lifted it, there was Spike underneath looking very confused! He glared accusingly, and almost indignantly, before scampering off.

He'd obviously managed to nudge his way underneath to get at the dish of food and as he'd moved away from the feeding dish the planter had popped back down thereby imprisoning him :)

Not much sleep for us after that, I couldn't stop giggling!

Have a nice day!