Many years ago, I was a junior computer programmer in a very old fashioned world. The men and women's pay scales were different (honestly), even when you were doing exactly the same work. And there were many other differences - presided over by our rather pompous IT Director Mr Charles Kenneth Powell (just call me CKP he used to say!) - not least his very own executive loo/rest room, just along the corridor from his office. 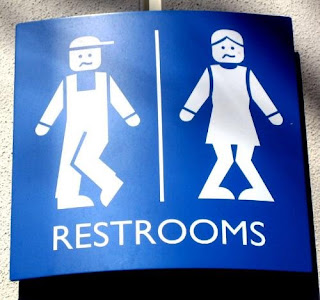 So, off trots CK on his annual holiday and, whilst he was away, building management set to and did some alterations didn't they. Back comes CK and mid-morning nips into his executive loo, noting that the door was unlocked and no doubt making a mental note to berate the cleaners lest any of the 'commoners' should be tempted to use his hallowed place.

Ahem, then he noticed that said loo had been updated considerably, lots of mirrors, extra basins and more cubicles added so he nipped into one whilst sort of wondering why the walls had been painted pink. You already know where this one is going don't you?!

Next thing the main door to the loos burst open and in poured a crowd of girls from the punch room - trust me, you did NOT mess with girls from the punch room. Salt of the earth but they certainly didn't take prisoners. Suddenly, while
CK cowered in the cubicle not knowing what on earth was going on, one spotted his feet under the door and shouted ''Ere, there's a fella in that cubicle!'

Apparently, at that point CK made a run for it - pursued down the corridor by a pack of screaming punch room girls.

Yup, in his absence, said 'executive loo' had been converted into a ladies loo - a sort of fait accompli as he'd have raised the roof at any attempts to do it with his knowledge. I do seem to remember that the building manager was transferred elsewhere soon afterwards.

But, I never did find out if he was hopping along being chased whilst trying to pull his trousers up or what :)