Less is More - use a flourish

Another card whipped up super quick in between dashing about. It's for the current Less is More Challenge, which is one-layer and to use a flourish: 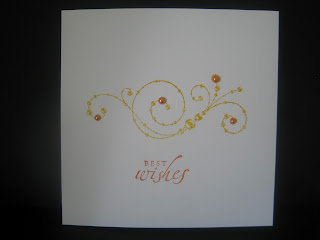 And then, later on I trimmed it down (look away Mandi and Chrissie - this is no longer one layer): 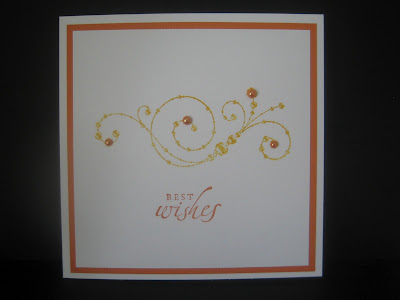 I just added a backing of pumpkin coloured Core'dinations card - and think it gives it more 'oomph'. However, no way was I going to miss LIM if I could help it so the top version is my entry for this week.

No Friday Feast this week - there just hasn't been time I'm afraid. Unless you'd like me to take a photo of the bacon stottie cake sarnies? :)

Quick edit as am on my knees with tiredness here - the trip 'oop North' was great. Apart from a delayed return flight, ain't that always the way though. Oh, and I actually headed off towards Edinburgh in the hire car when I wanted Newcastle Airport on the way home - who put a couple of extra roundabouts in huh, huh?!

OK, you want the dirt - I wore a longish floaty skirt and managed to get 'hooked' on the little steps down from the plane at Newcastle, a nice man rescued me whilst trying to stifle his laughter, especially as I was at the point of being one of those dancers who whip their skirts off with a flourish.  But worse was to come. OK, OK - laugh as you wish - when we landed back at Southampton this evening, having been so conscious and flipping careful about said skirt all day each time I went to the loo - whilst washing my paws a young lady (grinning) told me the back was tucked into my knickers! So that skirt is due for the bin if it doesn't behave in future! I just don't get on with longish floaty skirts!!

My step-mum had a good day, sense of humour still there although some memories are dimming - and she still can't get to grips with it being her 80th. But, I sat and did a few little quizzes with her in the afternoon and she was sharp as anything on those! I took some photos of her, I think there's a nice smiling one but it's time for my bed so might post that another time. But hey, what a stroke of luck - the flipping Olympic Torch passes right in front of the Care Home (fabby place BTW if you really have to live there) on Friday 15th!! Yikes, that really could have scuppered plans as roads will be closed tomorrow (or today depending when you read this) - with all the darlings from the home lined up along the road using their zimmer frames.

Also, just for Brenda, it's gone 11pm now on Thursday but at about 10pm when we got home after Len picked me up in the downpour at Southampton Airport, I made us a fried bacon and egg stottie each - yay!! :)) Sorry B, we gobbled them too quickly for me to take a photo :) Lots of them in the freezer though, squashing bags into the plane's overhead lockers on the way back I almost threatened a man with violence if he damaged them :) I think he must have been from the North as he held his hands up in surrender!