As some of you know, my step-mum is currently in a care unit being assessed as to whether she can return home or needs to be in full time care. I spoke to her again yesterday (she lives in Northumberland) and it's the brightest she's been since she was hospitalised - which is a huge relief as we live so far away.

I made this card for her on Wednesday, in between blitzing my messy desk and trying to hop round a few WOYWW blogs: 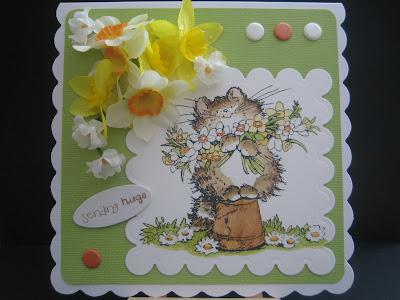 The image is done using a PB Stickeroo stamp. It's the first time I'd inked this little beauty up - but certainly not the last! I had such fun using my Aquamarkers to colour it in :)

I used a scalloped card topped with Coredinations green card, with the corners rounded - in real life it's a perfect match for the greens in the Aquamarker colouring. What I love about Aquamarkers is that I can mix and play around with colours on a perspex block to get just what I'm looking for. A little squiggle of this, a dot or two of that and then a good old mix up with a wet brush!

A scalloped square Nestie was used to die cut round the image, the sentiment is from Craftwork Cards and I added a few bits of orange/white Card Candy, also from them. I found the flowers tucked away in my stash - possibly among the first I ever bought as they are silk and were snipped from little branches of flowers bought from a local garden centre years ago......way before I discovered Prima and Wild Orchid flowers, and probably before using flowers on cards was so popular. The yellow daffodils were already just flower heads in a little box, from the same garden centre, and they came with droplets of 'dew' on - which was such a novelty back then. Hmm, was this me being ahead of the game for once in my life?!

I also discovered that my step-mum can have fresh flowers after all, so a lovely bouquet and  a cuddly teddy should be delivered on Saturday. We're never too grown up for teddy bears are we :)

Thank you so much for calling by!