Hi there and a very warm welcome to the Christmas/New Year Snippets Playground - which is starting extra early this year and will run for FOUR weeks, right over Christmas and New Year.

Warning - this is a really horrendously looooooooooong post as it sets out how the draw will work, in a lot of detail and also repetitively in places to be sure to get the points home!

There are several reasons for such a long challenge. First of all we have absolutely loads of Christmas themed prizes in the Toy Box - some are from me and a good few have very kindly been donated (huge thanks to Darnell, Jackie T, Val and Zoe!). As some of the donated prizes were sent to me with Ruby's challenge in mind, I will be making a double donation to the rescue centre who saved Ruby and her siblings - before she then found her forever home with Lynne and Greg. £40 with £10 Gift Aid from the taxman makes it £50. I hope that sits well with those of you who might see a Christmas themed prize pop up that you donated with Ruby in mind. Lynne is happy with this by the way.

Some prizes may have 'samples', but by no means all of them will. Running over four weeks keeps us nicely in step with fortnightly challenges and results. I would really love the Grand Draw to go out on a 'high', this really will be the very last Grand Draw spanning several weeks with lots of prizes.

Plus - it gives you time to follow the theme! Did you get that? The theme is actually very simple - it's snippets as usual but this time I'd like your entry to be made following the theme of Christmas and/or New Year.  And please, not just something you think qualifies - I do like clever and thoughtful use of snippets. In fact, I might even exclude anyone who is rather cavalier with their entry!

So - it's time to celebrate both the Christmas and New Year Holiday - plus, it's now almost ten whole years on January 2nd since I took the Snippets Playground over from the lovely Jules! And there are exciting times ahead for our new decade as well, that I totally promise you. Just watch this space.

By the way, the prizes all vary in value and their letter in the alphabet is purely for reference purposes.

Here's my snippets card for today (it's been shown on here previously) and just the embossing folder is the hint: 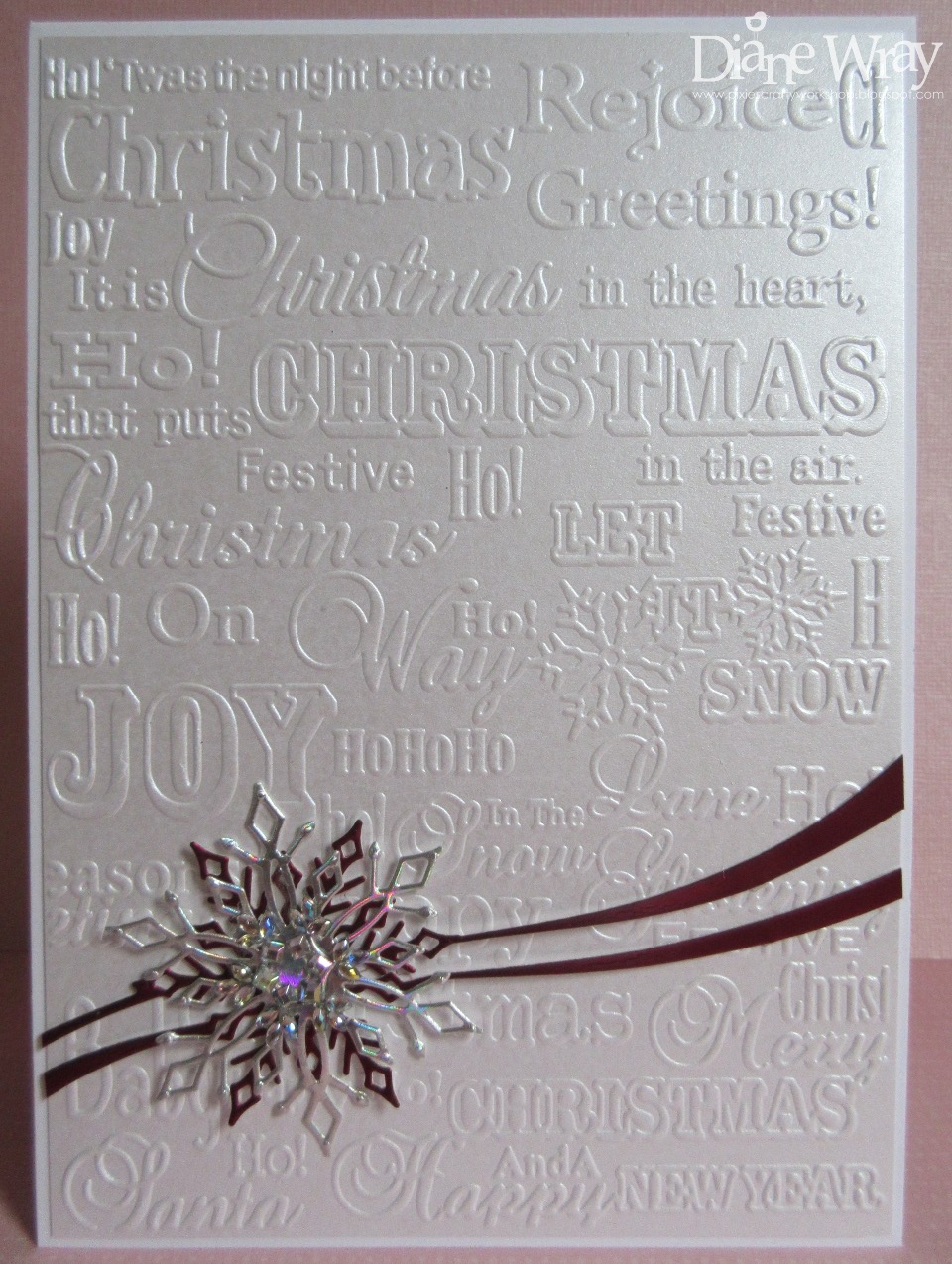 - stuck the die cut in place onto the embossed panel using very narrow red line tape and left a bit of overhang. Trimmed off the overhang from the reverse side to get a flush cut along the edges of the embossed panel

- next, die cut a larger snowflake from silver holographic card backed with medium grade sticky sheet, using a Memory Box 'Lindeman Snowflake' die and popped it on top of the deep red snowflake

So, here we have Prize A of the Christmas/New Year giveaway - as I said, the above card is just a partial hint! It's a set of five approx. 5" x 7" embossing folders by Sheena Douglass. They aren't in their original packaging as I bought them pre-loved - but never used. Not my photo and I bought all five folders purely for the 'Christmas Greetings' folder! Someone was desperate to own it, having seen it on my blog ages ago apparently. She then followed a lead that I sent her in the USA where she lives and hit lucky. But these popped up on Facebook over here at almost the same time! So we ended up with her finding one in the USA and me at the same time with a batch of five folders.☺

For the Grand Draw this year, the Playground Mr Linky which is below will run for four weeks and closing time will be 11am on Saturday 8th January 2022 and this post you are looking at right now is also where to add any entries - with a maximum of just one entry - over the four week period.

NB - I repeat - your entry must be Christmas and/or New Year themed. If you link something not themed then you won't be in the draw.

One, and only one, entry into Mr Linky means you're in the draw - and the more prizes you say you'd like to win in the comments in each 'additional prize' post does increase your winning chances. You have four weeks to play but you can only win one prize during the draw at the end, to give others a fair chance.

At the same time as the chance to enter your themed snippets make into Mr Linky closes, I plan to also close all commenting on all prizes on offer, and may even close some of the prizes as we go along - so be on your toes.

If you see a prize you'd like to be in the 'pot' for then please leave a 'Yes please' (or similar) comment in the same post where I show you the prize. AND, don't be shy about wanting each prize as it appears - that way you'll have more chances of winning something.

So for today's prize, leave a comment below. Please don't leave it right until the end and nip through all the prize posts adding 'Yes please' to each in one fell swoop. Remember, they will show up serially on my dashboard in the comments section and if you do that I certainly will notice and wouldn't feel that it's in the true spirit of the Playground so you do risk not being in the draw at all. So, if you want to play then do pop in over the festivities to see what's on offer :)

As I already said, there will only be the one Mr Linky for all entries - which is at the end of this post of course. I'll remind you where to go to link each time I post a new prize on the blog if you haven't already added your one card.

I hope I've explained how the coming four weeks will work in the Playground? Please just say if it's left you confused and I hope it doesn't seem too draconian. My main priority is for everyone to play fair and hopefully be in with a chance of winning something they would like.

There will be a new Mr Linky on Sunday 9th January 2022. The picks and also the results of the multiple raffle/prize draw will appear as soon as I can manage, hopefully on Sunday 16th January - but I'm making no promises!

Please also remember to link back to the Playground in your blog post to be eligible for the draw, as well as saying what snippets you used on your entry. I'm going to toughen up a bit on this requirement.

Now, this is important girls, you can leap in throughout the whole giveaway and say 'yes please' to as many prizes as you like .... even if you haven't already made and entered your snippets make into Mr Linky at that point in time. But don't miss the closing date and time of Mr Linky!

As usual, I think it's only fair that the way I do the draw is from A onwards, regardless of value or number of prizes. I won't be using the Random number generator, if you win a prize, your slip is then removed from the pot.

Please let me know if you have any problems linking, it's always fairly easy for me to sort out so don't struggle on alone.

Sorry this is so wordy and I've repeated a few points but I didn't want to leave any issue not covered - even more than once! Do please ask if anything isn't clear.

Dudley continues to be a smart little chap here. His breeder told us he was an intelligent boy and on that score she was so right - but it comes with the price of him cottoning onto things so fast that we often look at one another and say 'Can he speaka the lingo?'. We spell things out (T. R. E. A. T), and even use a smattering of Thai, Spanish and German but he soon learns - probably from intonation. Clever little monkey!

He had a bath/shower earlier today (Saturday) and as I type he's lying flat out on his back, fast asleep, on our bed - all nicely dried and brushed. And of course he ran off and hid, the moment he spotted his big fluffy bath towels being gathered along with his shampoo! Len and I are still drying off - I think it would be easier to just pop on swimsuits before tackling the bathing session! And possibly masks and snorkels too ☺.

Love from Dudley and yours truly, do come and play and get into the festive spirit. Speaking of which - Dudley has a nose like a little bloodhound and will 'snitch' if he finds a certain Head Prefect doling out mulled wine and sausage rolls - without including me for the wine, and Dudley for a sausage roll!