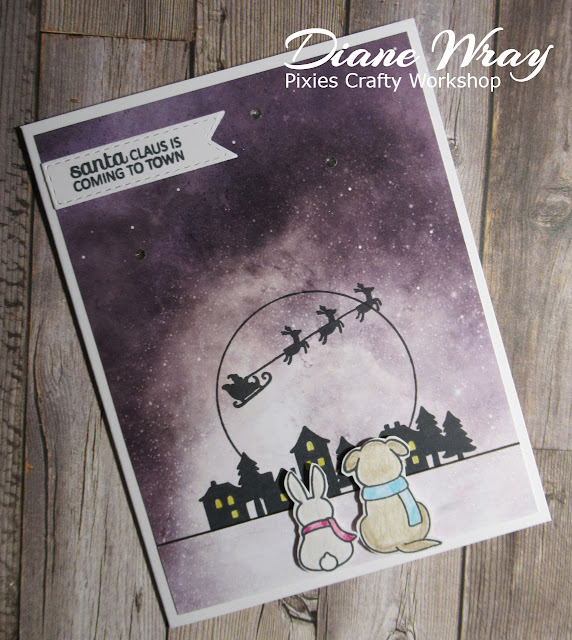 - 5.25" x 4.0" piece of designer paper from the Sticker Kitten 'Celestial' paper pack, carefully trimmed so that the image would be in the right place for the moon's aura on the end result

- once sized, I stamped the little house scene with moon outline onto the backing paper about 0.75" from the bottom of the paper - all stamping was done using a Memento 'Tuxedo Black' ink pad and a Clearly Besotted 'One More Sleep' set of stamps

- used a ruler and a black Fine liner pen to draw right across the background panel, under the houses and to either side

- stamped the Santa, sleigh and reindeer flying across 'the moon'

- coloured the house windows in, using a yellow Polychromos pencil

- glued the background to the card front

- stamped the 'critters' onto a snippet of white card, coloured them with Polychromos pencils and fussy cut them

- stamped the sentiment onto another snippet of white card

- added three flat sparkly gems, which don't show up on the photo, sigh, and called it done!

This card was made for Dudley from Len and I - crazy or what?! Appropriate for Christmas Eve for sure! The design had been on my mind a lot in the previous week or so before making it. I wanted to 'cheat' and use some night sky backing paper - and it was pure fluke that the Paper Sticker Kitten papers included one design with a distinct 'aura/halo' which I could use to place the moon when stamping! Bit of juggling, but so worth it. 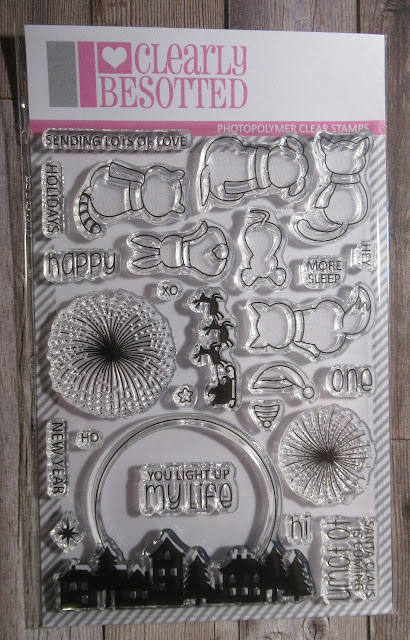 The prize is a Clearly Besotted stamp set called 'One More Sleep'. Sorry the photo above isn't very clear. It's yet another stamp set that's been 'tweaked' twice by CB so mine, bought a year ago, is the first version. The one on offer is the second version and now they have a third version! To get a clearer view of the third version set - go here to Clearly Besotted. The second version, which is the prize shown above (and is the one I like best!), does have a few more sentiment stamps. I can't understand why you would produce three slightly different versions though. Supplier issues perhaps?

Whilst at it, I made a second card the same - it's often just as easy, and steals a bit of a march on Christmas 2022 cards.

I forgot to enter this card into Jo's Christmas Kickstart Challenge #57, where the current them is 'If it's Christmassy'. Why not join in and play along too?

Love from Dudley and of course me. Remember - if it's not done, made, cooked or bought by now - you will still survive without it! Have a super day tomorrow and Merry Christmas to all our lovely friends,