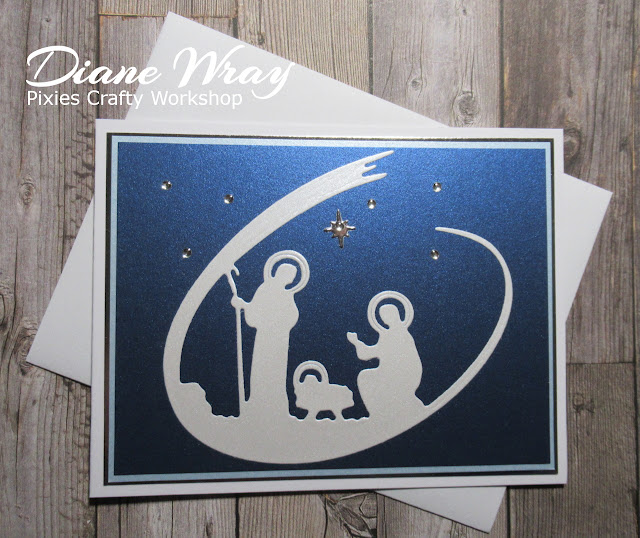 - snippet of pale blue pearlescent card, trimmed to very slightly smaller than the silver layer, then glued on top of it

- the 'fun' part was die cutting that gorgeous 'un-branded' Nativity die. I tried all thicknesses and types of card and just couldn't get a totally clean cut using my Cuttlebug, even with various shims. Then, suddenly remembered some 120gsm pearlescent white paper I'd ordered a while ago in error - and it worked a treat!

- added the Nativity die cut (using a glue pen) to a snippet of deep blue pearlescent card, which I trimmed down after adding the Nativity scene. It's a neat little trick if, like me, you have a knack of not being able to centre things easily ☺

- die cut the star from a snippet of silver card - and it cut like a dream! So I really think it's the intricacy of the beautiful Nativity scene that was the issue

- glued the star in place using a glue pen, topped it with a teeny sparkly gem and added a few more directly onto the deep blue card

I made four of these in one batch and they're up in my list of favourite makes for this year's Christmas cards.

And this is today's prize, both from me: 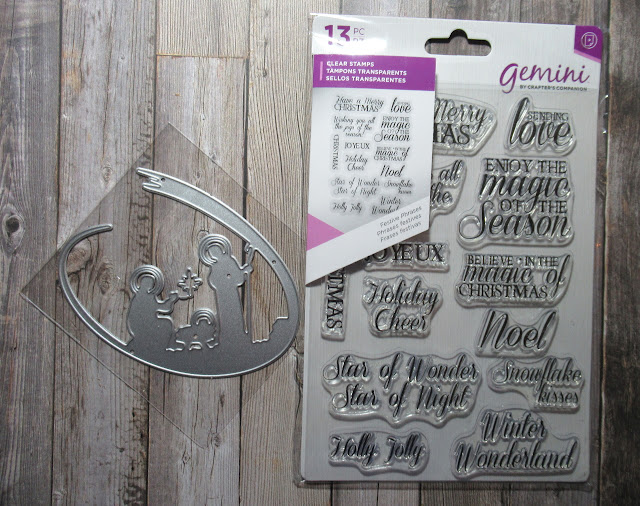 It is, of course, an 'un-branded' Nativity die the same as mine - plus a Crafters Companion 'Festive Phrases' set of stamps. I've added the stamp set in for two reasons. The Nativity die wasn't at all expensive (Amazon, most likely made in China) and, given my initial struggles using it, I would hate for a winner to be disappointed if they have issues cutting with it. I did overcome mine as I said above, but came close to giving up at one point. (I'd be happy to enclose some of the white pearlescent paper for the winner as well of course!). You have to snip the star out of the main die - and watch you don't lose it, I almost did when filing the used die away!