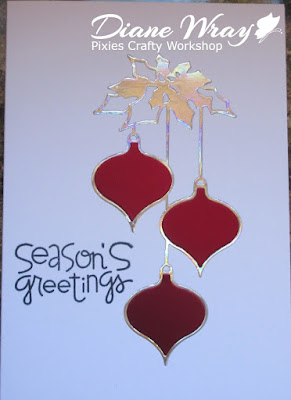 This is elegance at it's finest Di! I love the die and how you used it!!

Luffly Di, and what a true friend who doesn't give up, well done Donna. X

Well done!
I had a problem with a die that was faulty, and like you, it was a long process, but they allowed me to choose something of the same value. A happy result (eventually)

Di love the color combination you used and It feels funny to comment as DT on your post as it is only from your blog I came to know about the Rudolph days Challenge!
Rudolph Days Challenge DT
Dr Sonia

Hi Di, a beautiful card, love the cas design (which I'm yet to master) I also have a die that doesn't cut very well, I should have thought about contacting the company... Happy Rudolph Day! Have a great weekend... Megan

Hello Di! Your card is so beautiful! Love the silver and red color! Looks so elegant! Thank you so much for joining us at the Rudolph days challenge this month! xx

This card is so pretty.Your inlaid design is so in style over here. I really like the look of this style. Yours is a beautiful job and great colours sued here. That red justs pops off the page.
Thanks for taking part in the August Rudolph Days Challenge.

What a very striking card Di and seems all ended well in the end.

Oh well done for perceive-ring and that they Memory Box finally found your e-mail and good on them for agreeing to send you a different one too and i so love what you have done with it too, luv Sam x

A lovely card I've gone for baubles too! How fab of Donna to be so tenacious over this for you so glad you didn't lose out.

What a gorgeous die, I love the baubles and the colour combo that you've used.

Lovely die and a great result (eventually) from Memory Box.

This is a lovely bauble die and persistence obviously paid off in the end. I love your pretty inlaying, and six more cards towards your total Di. x

Very elegant CAS, these bouble and the leaves look gorgous with your design!

Glad your issue was resolved, and you picked a winner for your new die. This is lovely.

This is very pretty, Di! What a gorgeous die cut! Now I need to get cracking with my Rudolph Day card! I have big plans to use that Peace Dove die I won from you! I just clicked back to read about your defective die - this has happened to be before too, not with Memory Box, but another company and luckily they were quick to replace it, so I'm glad yours worked out.

Super looking and very classy. Love the deep rich red of the baubles. Great that they sorted you with a replacement die . Must make a card for Rudolph day and hope that we can get the internet back up in order for me to write a post for it. Hugs Mrs A.

Very elegant card Di. Love that die, oh dear I can feel more retail therapy coming on, and I keep telling myself "no more Christmas stuff" but I have no will power(lol)!!

beautiful! i love how the red pops and the silver is so very elegant! glad you had a positive result with memory box in the end. thank you so much for playing along with us at the rudolph days challenge!
linda
DT member

Good news that MemoryBox have come up trumps and a great choice of die, and it will be quite useful as you could add lots of different items onto the baubles, i.e.. a small snowflake.
Lovely card and a great CAS design.

Very elegant! I'm glad to hear that Memory Box came through for you. I've heard they have excellent customer service so good to know that's a fact.

A lovely elegant die and it looks fabulous with your inlaid technique. I love that red satin card.
Jean x