Hello again! If the weather forecast is right, we should be into another spell of hot weather here this weekend. If not, and it's wet and miserable, then we can always craft :)

Hedgie update. The parents and babies are still coming to 'feed at the trough' nightly and late on Saturday night just before this post went live we spied a real whopper hedgie having supper. A much lighter colour than the others we've seen, almost 'blonde'. Looks like word is getting around!

I had such fun making my snippets card for this week. I first spotted the humming bird stamp over at Darnell's blog a while ago - and fell in love with it.

This is the end result of the card I made, I had to nip over to Darnell's to get an idea of the 'hummer' colouring - being as how we never get to see these lovely little birds in the wild in my neck of the woods in deepest Hampshire, UK: 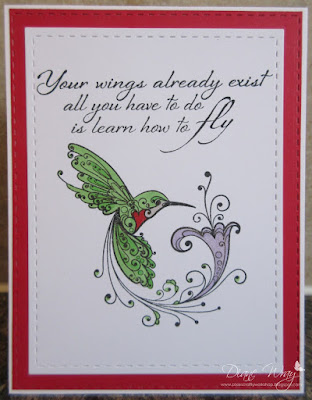 And a closer look, to show a little bit of the shimmer I added with clear Wink of Stella: 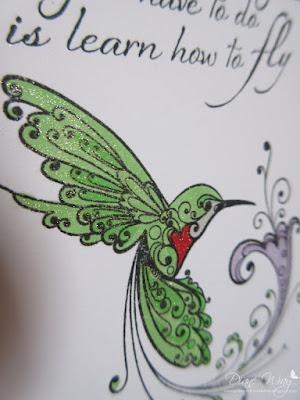 - a snippet, from my huge snippets folder, of SU 'Real Red' card to pick out the little pop of red I intended to use on the 'hummer', die cut using the largest die in the Lil'Inkers 'Stitched Rectangles' set. In fact, the largest size only embosses/cuts the stitching rather than a clean cut right round the outside - which worked great for me 'cos then I trimmed just a sliver off each edge and glued it to the 'US of A' sized card front leaving a narrow white border

- on a piece of scrap white card, also a snippet, I stamped the humming bird image using Memento 'Tuxedo Black' ink and the fabulous Inkadinkadoo 'Humming Bird' stamp (thanks Darnell for being an 'enabler' yet again)

- next I coloured the image using Pro markers. I confess this gave me grief as, some coloured images I found, perceived the 'trumpet' as a flower - and some thought it was perhaps part of the bird's tail. Why do I 'over-think' these things?! So, I went 'middle road' and take it as you wish huh?!

- the sentiment is called 'Learn to Fly', which I just love, by Inkylicious - stamped using Memento 'Tuxedo Black' ink

- then, having die cut the panel with the next size down in the Lil' Inkers die set, I just glued it on top of the red layer

-final touch, which looks so shimmery in real life, a covering of clear Wink of Stella over the image!

It really is the prettiest stamp I've bought in a long time, a total delight to work with, and the sentiment stamp just seems to fit so well with the shape and flow of the image. 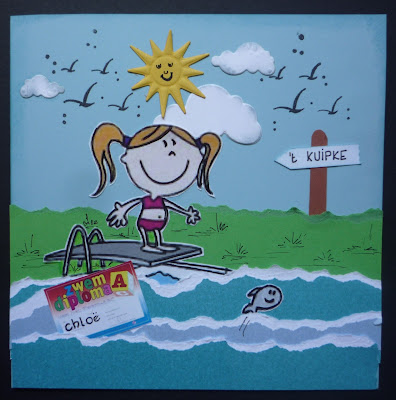 I did giggle at the brilliant card, made by Lia! Such a lovely scene and how cleverly the waves and surf have been created by tearing paper/card. 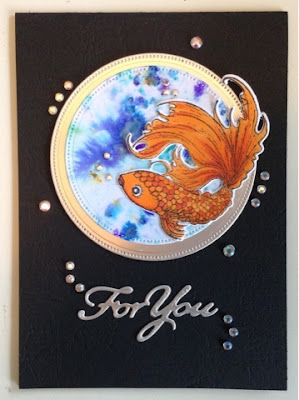 I think this is a really stunning card, made by Cara. The black is so dramatic, love the glorious fish and the background was made using Pixie Powder. Adding the sparkly gems as bubbles is a great idea too!

And still on the theme of water: 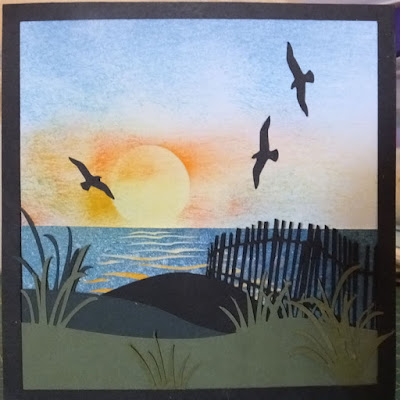 What a fabulous scene, which Kate brought to share with us. The depth is just amazing isn't it! So tranquil as well - love it. The card is a wonderful mix of duster brushed sky and then brilliant layers of snippets added to create the sea and foreground.

And for a total change from Summer we now have this little cutie: 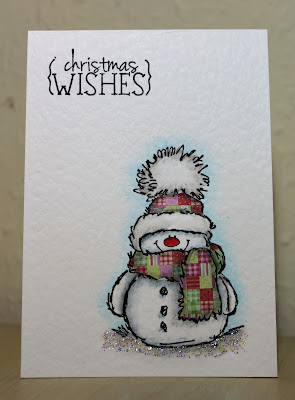 Helen came to play and brought this darling Christmas card to share. Helen is a whizz at paper piecing and the little hat and scarf on Penny Black's 'Snowy' are just perfect! He's one of my all time favourite stamps and I don't get to play with him enough - might just need to CASE this great idea to paper piece his hat and scarf please Helen!! 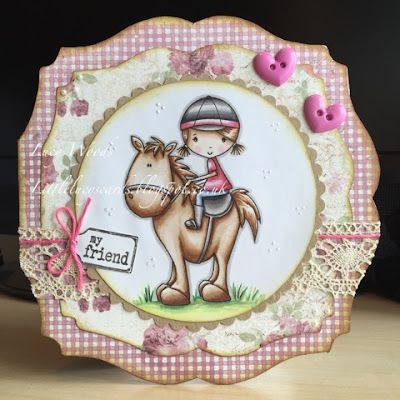 And last but not least, Lucy joined in the fun with this fabulous card! What a wonderful snippets make, tons of detail and I just adore the digital image! It would be perfect for one of the little girlies in Germany, they both go horse riding  so it could be at least one Birthday card solved :) Thanks Lucy for the idea!

I'm calling a halt there at just five picks this week. Purely as the sun is shining and I want to go out to play! I could have gone on for ages with picks - so many wonderful makes and clever ideas to choose from! There's so much talent, variety and inspiration in the Playground - as one sweet blogger said not that long ago 'It never gets dull'.

Mind you, things aren't quite as lively since our Sarn took a step back from blogging in order to rest her shoulder a bit. Parsnip still peers out through the fence checking to see if she's loitering on the other side :)

We had no new Playmates this week - but once again a healthy number of you came to play (45 of you).

Now it's prize draw time, for the cups and teatime sentiment dies and the Pansy stamp set, as shown last week.

And the first person chosen, for the two teatime themed die sets is:

Eemeli
And the winner of the Pansy stamp set is:

Mary Anne
Congratulations to both of you girls! I have your snail mail addresses here and will take a trip out to the Post Office this coming week to post off your prizes.

And here's this coming week's prize: 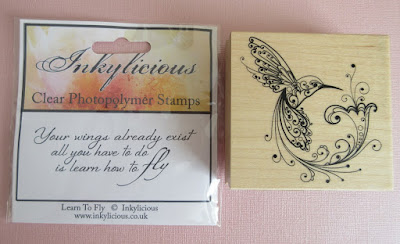 It's an Inkadinkadoo 'Humming Bird' stamp and an Inkylicious ''Learn to Fly' sentiment stamp of course, just like I used on my snippets card above.

All you have to do, if you want to be 'in it to win it' is to say in a comment if you'd like to play for both or either one of the the stamps. If you win and only want part of the prize then I'll do a second draw for whatever it is you don't want, although I do think they're a bit of a 'match made in Heaven'.

The Snippets Challenge will run for one week and the Playground gates will close at 11am UK time on Saturday 13th August. The gates will open again at midnight UK time on the same day.

And, now that his presence on Darnell's tour of England is an open secret, I can finish off with this photo of Hammy. 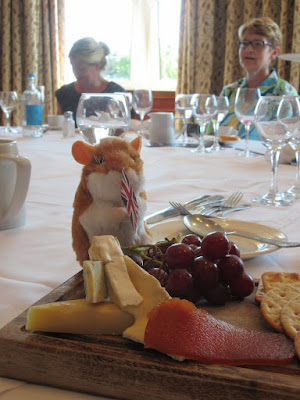 Taken at the Southampton lunch gathering on 19th July when he made his first appearance - and he immediately hopped over to one of the cheese boards. Please note, the pink stuff that looks like a slice of boiled tongue (ack!) is actually quince jelly and it was delicious!